These new keyboards do not call it split but right and left but the question is in regards to splitting in 3, in other words 2 splits for the right hand and one on the left for the chosen style. I know the S970 has that function but I would like to know if I can do the same with the S770.
Ad

I'm not a Yamaha guy but on most keyboards it boils down to the number of zones a keyboard can play and whether or not you can specify the range of notes for each zone independently. Best thing you could do is download the manual from Yamaha and see if the feature is doable.

Try this . .
Michael was on the money some time ago on the same topic.
https://www.keyboardforums.com/threads/is-yamaha-psr-s770-has-dual-voice.27109/
C

The manual shows you how to do layers but not how to have the Right1, Right2, and Left set up. Believe me, I have tried
T

And . . . . So . . . . What are my credentials for all of this ? . . . . I have been a PSR-3000 owner/player for soon-to-be eleven years. Other than expandability added with the PSR-S950 and the real-time DJ features added with the S970, if you've played one, you've pretty much played them all. Aside from diskette vs Smart Media Card vs USB Flash Drive, the number of tone/rhythm presets, and sound quality the basic features/operations don't really change all that much from one model to the next.
Last edited: Oct 27, 2017
T

See Pages 35, 36, and the top of Page 37 of the PSR-S770/S970 Owner's Manual for instructions on splitting the keyboard. See Pages 58 and 59 for additional information. That is the OWNER"S MANUAL *** NOT *** the REFERENCE MANUAL. As its name implies, the Reference Manual only makes "reference" to the SPLIT point in relation to other features/functions, but it does not tell you how to set it. On the newer keyboards that come with both an Owner's and a Reference Manual, whenever you do not find a topic in one, that you know should be covered, check the other manual.
Last edited: Oct 27, 2017
Ad

Rayblewit said:
Try this . .
Michael was on the money some time ago on the same topic.
https://www.keyboardforums.com/threads/is-yamaha-psr-s770-has-dual-voice.27109/
Click to expand...

That post from Michael does not show how to do the settings either.
T

I do not understand why you posted Ray's reply in response to my posts. I made no reference to Ray's post. I also do not understand why you can not find the instructions that I have referred to, so I am attaching images of Pages 35, 36, 37 of the manual that contain the instructions I referred to. On page 35, under the title "Voices" find the third bullet point entitled "To play different Voices in the right- and left-hand sections of the keyboard (Split):". Those are the instructions you are looking for. The procedure is the same as for my PSR-3000. I just followed them, step-by-step, on my PSR-3000, and they worked fine. If these do not work for you, then I do not know what else I can do. Best of luck ! 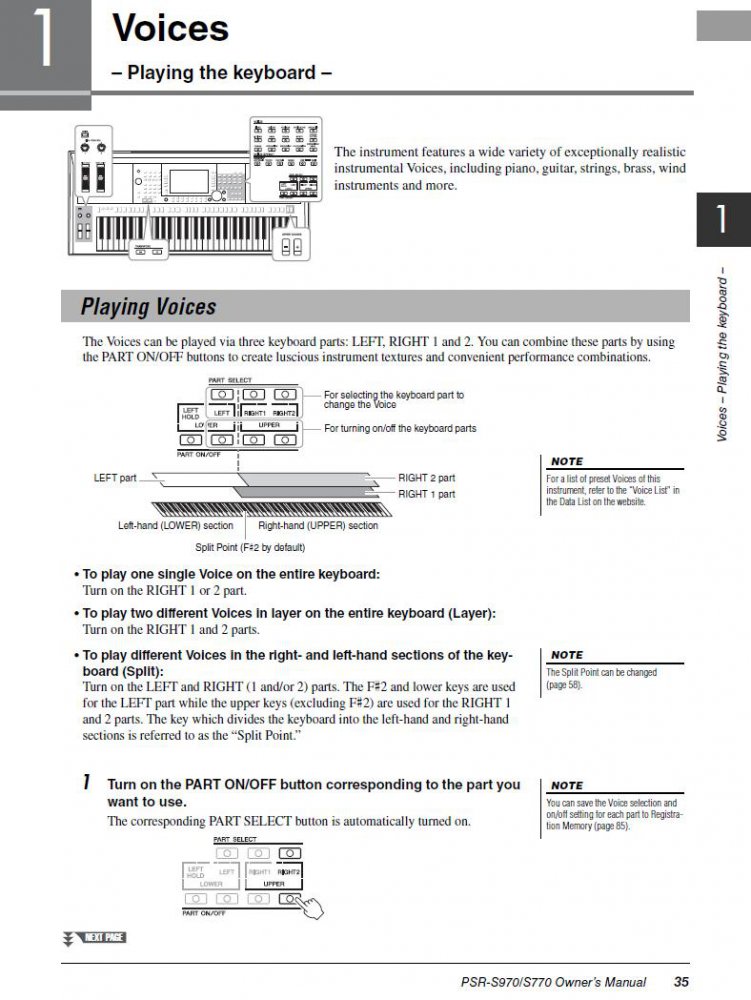 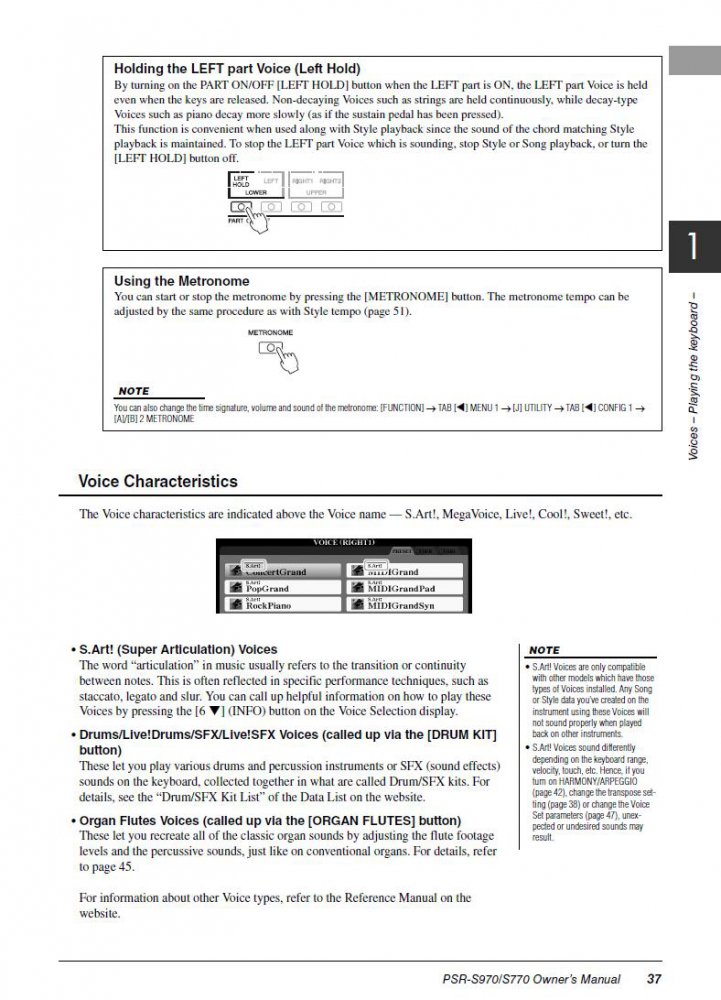 Ted is correct that the PSR-S770 cannot do a Right 3 split using the panel controls and menu functions, the way the Tyros models can. The keyboard has Left, Right 1, and Right 2 parts, but does not have a Right 3 part.
T

Sorry, Michael . . . . and thanks for the correction. When I realized I had looked at the wrong "Split" pictorial for the T5 third right voice, my edit window had timed out - the price of being so long winded, and as usual in times like that, two other crisis pots started boiling over - neighbor wanted help getting his sheep off the road and back into their pen before any got hit (all back home again - jiggity-jog - oops - wrong critters), and furnace shut down (flame detector needed cleaning - a real pain in the . . . ahem . . . well . . . a real pain). So you beat me to the punch with the correction, but again - many thanks ! I just hope Carlos can make use of all that info I posted above. This has got to be getting really frustrating for him by now.

SeaGtGruff said:
Ted is correct that the PSR-S770 cannot do a Right 3 split using the panel controls and menu functions, the way the Tyros models can. The keyboard has Left, Right 1, and Right 2 parts, but does not have a Right 3 part.
Click to expand...

Scroll back to the top of this page (The Original Post!) and you can see Carlos is only asking for 2 right splits.
Why are you guys talking about 3 right splits?
I think this problem is solved! Ted's images nailed it!
ray
Ad

Carlos opened the door on that conjecture in his opening post and the title for this thread, Ray. He is looking for three zones - a left and two rights, which he states that the S970 can do, and he wants to know if the S770 can, as well, but that is not true. Both the S770 and the S970 can only split into a left zone and a common zone for Right-1 and Right-2, as opposed to the Tyros models which can further sub-split the common Right-1 & 2 zone into a "reduced" Right-1 & 2 zone and a Right-3 zone, for a total of 3 zones: left, Right-1 & 2, and Right-3. You, and possibly Carlos, may be assuming that the left has its split point, Right-1 has its split point, and Right-2 has its split point for a total of three zones, but that is not correct. The Right-1 & 2 zone is a single common layered zone with a single common split point. The Right-1 split point can not be set separate or different from the Right-2 split point, which would be required, if they were to be considered separate zones, in the classic sense of that term. But all of this is just a side issue to me and warrants discussion strictly for edification on the S770's and S970's capabilities that Carlos brought into question in the first place. My main reason for getting involved in this thread is his continued insistance that the manual made no reference to splitting the keyboard, even after I gave him the page numbers in the manual and told him which manual. So, I posted the images to avoid any further confusion, but I am not sure at this point that they won't add to the confusion.
Last edited: Oct 27, 2017
You must log in or register to reply here.