I figured this deserved its own thread rather than cluttering up the What Are You Listening To thread.

Here's the rules... Simple no?

Anyone out there planning a trip up here this winter to fire up some icicle doobies?

I must have lead a shelered life, despite the Sixties I have never had any non-prescription chemical product. Did not know what spliff/weed/pot/ganja whatever you call it smelt like.

Until 10 years ago when I met she who was to become Wife number 2, the shop where she was the Manager had some rough ground behind it that was Mecca to the local druggies and here she introduced me to the smell of spliff.

Now when we walk around Manchester, Liverpool even our own City its there the whiff of spliff, its openly smoked by those in need.

So there was I just outside our City centre waiting at the traffic light controlled pedestrian crossing for the vehicles to stop when a car went past with smoke billowing out of the open windows, it was like a scene from a bad Hollywood movie, I did not see the occupants but there were a few in there and yes you guessed it that whiff of spliff was the result.

Does not bode well.

In Ontario we already pay the highest auto insurance rates in North America. I am terrified to open my renewal which comes due in January.

I agree that this does not bode well for any of us.

I'm surprised there's so little interest in this thread.

Artists have been inspired by drugs and drug culture for over a century.

To be sure we've seen our share of casualties but this is what many of them fought and died for.

happyrat1 said:
and many, many more...
Click to expand...

That is one of the stupidity of the young actions that I fail to understand.

With so many deaths within the music industry that have been drug and drink related the young have failed to learn from the stupid actions of their peers of an earlier generation.

Yes, I can see the pressures of the industry can very easily place artists and bands in situations where relief of the tensions is needed but surely their management should mentor them.

And look at the list, Elvis, Michael Jackson, Prince, Whitney Houston, Hendrix, the list goes on and on and on.

I can see that once hooked getting out of the use is very difficult and if those who I quoted failed, what chance does Johnny Nobody have when they have gone from zero to a multimillionaire in a few months.
Ad

Biggles said:
That is one of the stupidity of the young actions that I fail to understand.
Click to expand...

I guess everyone always thinks "It won't happen to me"

It's interesting how things are changing though. I'm not particularly into drinking, I've never been into smoking or drugs, but I see no reason why cannabis shouldn't been legal given things like alcohol and tobacco are. Nowadays in the UK there's an increasing number of young people who choose to abstain from things like alcohol completely (I think it's nearly a third IIRC).

Whether it'll impact the creative process? I guess time will tell!

To be honest Becky, I'd say pretty much the same. In terms of how damaging the drug is, it is no more so than tobacco or alcohol. Just as there are chain smokers and alcoholics out there who cannot manage their addictions there are also problem tokers who can't put down the bong.

In all of these cases, these are normally a small few number of individuals who have a problem with their drug of choice. Stigmatizing these people with a criminal record is the wrong approach.

At least now they can deal openly within the framework of the law and seek out help with their addictions without fear of legal reprisals.

And as for artists, marijuana is definitely well regarded as a stimulus to creativity as literally hundreds of artists have proven. People like Snoop Dogg and Willie Nelson will probably never OD on opiates, simply because they love weed so much. In fact, none of the other artists who ODed and died did so on pot. It's virtually impossible to do so.

This however, does not mean that we shall have an easy transition as the public gets used to it. Keeping the drug out of the hands of children was the top priority of the government in legalizing it. Undercutting organized crime and creating an atmosphere of education and user awareness are high priorities as well.

There may be a few bumps along the way as we hammer out the details over the next few years, but overall I am largely optimistic for the future.

Incidentally, the cops handed out the first ticket approximately one hour after legalization. Toking up in a parked car is a definite no no. As per the open container law in a vehicle it is just as illegal to consume pot in a parked car as it is a beer.

The cops here claim to be trained and capable of enforcing the laws and as of yet I see no reason to doubt them.

It is difficult for me to undertand the reasons behind lgalising pot. It makes no sense to me because I do not smoke it. I think politicians themselves must be crack heads. But seriously there must be valid reasons but I can only see the negative side.

We have legal injecting rooms in Melbourne where a junkie can inject him/herself without reprisals. Another dumb idea but again that is a biased opinion since I don't do drugs. "Safe Injecting Rooms" they call them. Huh! Safe? Putting poisons in ones body is safe?

Btw . . Gary I searched youtube for drug songs and I got pages of suggestions. So I think why paste anymore here. Your selection is ample. I added the Beatles LSD tune on impulse because it hit me! Came automatically to my thought process lol.

I no longer smoke the stuff either Ray. But when I was a kid I did my share of experimenting.

When you say putting poison into your body does that include Alcohol and Nicotine and Trans Fats and Refined White Sugar?

One man's poison is another man's pleasure and who are we to judge?

Worse. Why inflict a permanent felony record on someone who may have tried it only a few times and had the misfortune to get caught?

If the choice is between legalizing slow suicide and outlawing it turning otherwise normal citizens into criminals to support their habits then to me it's no conundrum at all.

As a bonus, if it helps keep it out of the hands of minors and organized crime then that's a definite plus.

As for why it took two days for the news to reach Australia? Those little pigeons flap their asses off man

BTW, over ten people died per day last year in Canada due to fentanyl overdoses. We need proper methadone treatments and safe injection sites to help stop the spread of HIV and limit the number of casualties with naloxone when a fentanyl overdose occurs.

Most opioid addicts started out with legal prescriptions to Oxycontin or Demerol or similar drugs and went rogue when they were cut off.

While you can't really justify the self destructive behaviour of people when it comes to their drugs of choice, regardless of how they got started an addiction is a powerful monkey clawing at your back.

Here's one of my favorite Stones tunes from the 70's that I took as a warning even back then. Believe me, I knew needle junkies back in the 70's personally and I never wanted to end up like one of them

We had a spell here in the UK of kids getting high on solvents particularly those from glue products.

We now have a range of pills that the young obtain and they seem to get high on these pills especially with alcohol. There are usually a few deaths a year due to bad pills being injested.

One of the current highs involve the use of the small propellant cartridges, those that used to have CO2 in them but I am unsure if other gasses are available in these containers.

One problem drug we have is called Spice, we see those that have taken it slumped over or staggering about as per image 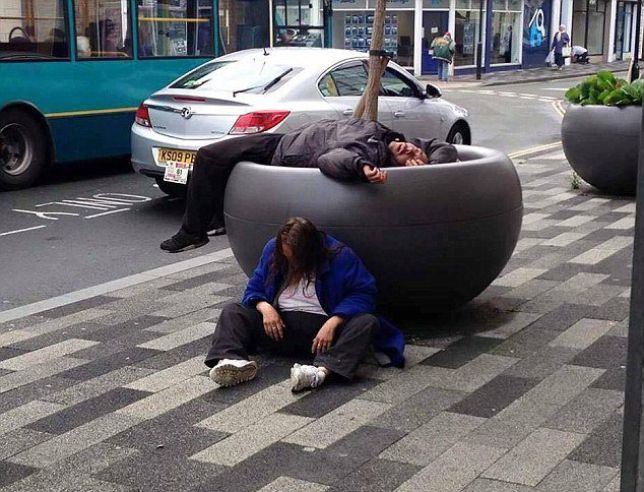 The propellant in canned whipped cream is Nitrous Oxide otherwise known as good old laughing gas. Other propellants in non food products include stuff like freon, propane and CO2. EXTREMELY dangerous to huffers.

Huffing solvents is a big problem in northern aboriginal communities in Canada. Young people feel lost and turn to huffing gasoline, paint thinner, glue and other solvents with horrendous results on their lungs, livers, kidneys and brains. Teen suicide is also a huge problem in Canada's northernmost communities.

Kids are always looking for stupid new ways to kill themselves, regardless if the latest fad is vodka soaked tampons or chugging beer up your anus with a funnel or sticking detergent pods in their mouths.

Stuff like this is yet another reason that weed, a relatively harmless and innocuous substance by comparison, should become more relatively available to the general population without drastic consequences.

I don't have kids, but if I did I'd rather they puffed a bit of weed than suck on a Tide pod for kicks.

I quit smoking pot back when I was in my mid thirties. I just stopped enjoying it. I do admit to getting a chuckle out of the government's idea that they will stop the black market and become the only supplier. The Canadian Cartel!
Ad

Almost a hundred years ago they ended bootlegging by repealing prohibition on alcohol.

They think the same logic applies to pot.

But if the tobacco black market is any indication this time they will f*ck themselves by overpricing it.

Government can't even keep up with the current demand according to recent headlines.

Current prices depending on the variety and THC levels are anywhere between $7 and $30 a gram in the government stores. When I was a kid a quarter ounce or 7 grams was $5!!! To be honest I quit smoking up when it became $12 a quarter. Too rich for my blood

With remarkably little effort the black market could cut its prices by half or two thirds.

On the other hand, though, they've severely stiffened penalties for selling illegally and to minors now. Up to 14 years in prison and crazy harsh fines as well.

Likewise the max penalty for driving impaired (weed or alcohol regardless) has been bumped up from 5 years to 10.

Personally I'm scared sh*tless to even have a microgram of THC in my bloodstream if I get into a fender bender.

Gary
You must log in or register to reply here.