Hope this is the best place to post this query.

I don't have a keyboard but only a standard upright.

Anyway, I have quite a few old music books, some of which have no chord symbols at all. In other cases, the chords are printed below the lower stave. I find the lower position more difficult to read and often tippex the chords out and write them in biro above the top line.

On the other hand, modern sheet music (even when three staves are printed) will invariably put the chord symbols above the top line. Can someone tell me why there is this difference and when the fashion changed? Presumably jazz musicians have always worked with chords but when did this kick in for the average learner? When I had my first lessons (at the age of 40), I became so discouraged at trying to read two staves that I nearly gave up. If I'd not come across a book of picture chords, I would have abandoned the whole thing. (Previously I'd asked my teacher about the symbols and she said, "Oh you don't want to worry about them - they're just for ukuleles.")

When I was teaching international students at a language school, we had a piano in the common room. Many of our students were Japanese - some of them superb pianists. They'd all been taught in the classical way and could sight read from two staves. However, they were amazed at how I was able to play from fake books using only chords. One girl loved to hear 'Cant help loving that man of mine' - yet, despite her virtuosity and best efforts, found it impossible to convert.

Thanks in advance for comments.

I can read full notation like the wind but improvising for me is tough. I can play from lead sheets though but I much prefer full nototion.

I find this is pretty commmon. Lots of great musicians can play by ear or use minimal notation. And many can't play a lick if it's not on the page.

But I think you can read anything if you just get enough opportunities (practice).

I had a roommate once who was a guitarist - couldn't play a lick on the piano. But he'd taught himself to convert regular sheet music (not tablature) in his head so he could play piano pieces on his guitar. I'm sure other people can do that, but I was blown away by his ability to sight read on guitar as fast as I could on piano.

I imagine that a pianist playing music from 3 stave sheets may not even refer to the chords printed top or bottom. They just play the notes as printed treble and bass.
However guitarists and keyboardists play the tune according to the printed chord.

Fred will probably tell me I am wrong . . Hehe

Anyway I agree with you Mike, I need the chord printed on top. I also tipex and rewrite it.

Rayblewit said:
Fred will probably tell me I am wrong . . Hehe
Click to expand...

I don't think so. I didn't see anything wrong with what you said.

When my youngest daughter was in high school, she took voice from a professor at the local music school. I didn't like sitting in on her lessons, so I sat on the bench outside his door. Next to his office was a professor of guitar, with multiple recording credits to his name. He taught his students using traditional music notation, not chord symbols. I don't see anything within a guitarists' brain that would make it impossible to read music. (Whether most do has far more to do with how they were taught than anything inherent with their instrument.)

First, in the olden days it was not uncommon for opera singers to be unable to read music. They had to hire someone to play the music for them, and they had to memorize their arias, etc., directly from someone else's playing and not directly from the music. This included some really big names in the business. Nowadays that's considered unacceptable. If you can't read music, you probably won't get past the second audition. ("Read this aria by a composer you've never heard of.") Luckily both of my daughters read.

As you know, orchestra scores have far more than the two (piano/harpsichord) or three (organ) staffs that keyboard players are used to. They have a separate staff for each instrument. (OK, two for harps and pianos, weird crap for percussion. Let's not get picky.) But orchestra scores come in two varieties. You can either get a score in concert pitch, where each instrument is transposed to C. This way what you see what the actual notes are. But there are also scores where the different instrument parts are written in the same key, etc., as the individual instrument score. That means that a Bb trumpet (what I used to play) would be off by a whole step from concert pitch. Etc. That way the conductor can say "hey, you, on the french horn. Next time you play the third note in measure 57, can we get a C#, the way it was written?" There are classically trained pianists who can reduce an entire orchestra score to a piano part live. That's uncommon, but not unheard of. However, my father knew a pianist who could sight read and reduce an orchestra score that was not written in concert pitch. That's rare.

Me? I'm working on my Level 4 sight reading skills. Maybe someday I'll be up to level five. (Although I'm not bad at faking it with chord symbols, as my teacher found out last weekend.)

And I've never seen chords below the music. I'm not sure what I would do; I'd probably be lost. (But I'm good at ignoring the "how to play this chord on guitar" symbols. I suspect that most guitarists also ignore the symbols unless it's a chord they've never played before. Heck, even I can play an E major, E minor and A major chord on guitar without looking it up. And I play guitar for crap. Imagine what someone who can actually play knows)

HI, Mike. This kind of musical notation is kind of historical. About 50, 60 years ago, the chord symbol was used, along with a guitar diagram, above the vocal stave, sometimes the diagram was omitted. In this way, the chord symbols did not clash with the lyrics of the song. In the treble clef of the piano, the chord always contains the note of the melody, as you see in the figure. It is a mere convention, which still persists today, without the guitar diagram.

Mike, by the way, you did not give us the feedback of your other thread.

Thanks everyone for the replies. (Apologies for omitting the feedback - only just worked out what to do!)

The lay-out from Here's that Rainy Day is quite common nowadays, I think. And I'd be able to play that (after a fashion) by looking at the vocal line and the chord symbols above. But in a lot of old music books and sheet music there are often no chord symbols at all and I just can't manage. As I say, I play a normal upright piano but really do need those chords. In front of me now I have a book, The Fifties, and a song that I like very much, An Affair to Remember. In this case, the chords are right at the bottom of the bass stave and thus separated from the top line by two lines of lyrics (English and French) as well as the treble and bass staves. Of course, I'm not complaining (!) but merely curious. Is it perhaps that pre-war pianists just had to learn the bass stave? When did people (in particular beginners) realise that one can create a harmony with left-hand broken chords? Is this something that didn't come about until popularisation of electronic keyboards? Did the average person who'd been taught piano in the pre-war and immediate post-war days even know about chords?

I remember the old (and long-running) advert for a correspondence course for pianists (it first came out in 1926) - "They all laughed when I sat down at the piano - but when I started to play ...!" I've always wondered what the magic 'method' was. I'm self-taught and was getting nowhere till I got to grips with chords. For months on end, I didn't try melody - just played chord sequences doubled in both hands. When you hit the right chords, it sounds good. And I'll never forget how thrilled I was to discover inversions - and that there are only three different diminished chords - and that the notes in a C6 are the same as those in an Am7 and so on.

Anyway, it's all great fun, which is the main thing.

Thanks again for all the helpful replies.

Fred Coulter said:
And I've never seen chords below the music. I'm not sure what I would do; I'd probably be lost.
Click to expand... 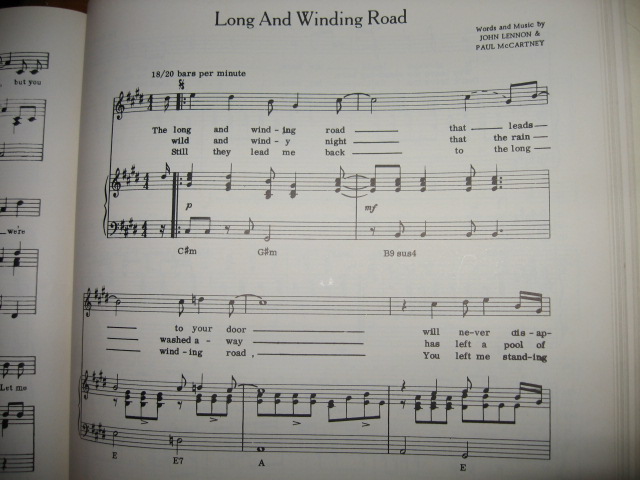