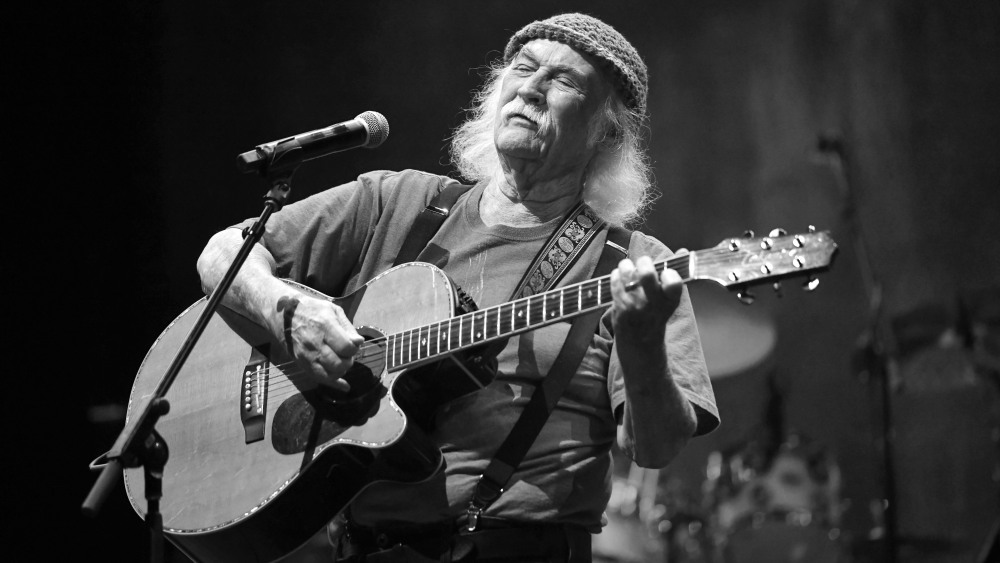 The death came as a surprise to those who followed his very active Twitter account, which he’d kept tweeting on as recently as Wednesday. One of Crosby’s final tweets the day before he died was to make a typically jocular comment about heaven: “I heard the place is overrated… cloudy.”

Former CSNY partner Graham Nash, who had been estranged from Crosby in recent years as their group went its separate ways, paid tribute on his social media. “It is with a deep and profound sadness that I learned that my friend David Crosby has passed,” Nash wrote. “I know people tend to focus on how volatile our relationship has been at times, but what has always mattered to David and me more than anything was the pure joy of the music we created together, the sound we discovered with one another, and the deep friendship we shared over all these many long years.

“David was fearless in life and in music,” Nash continued. “He leaves behind a tremendous void as far as sheer personality and talent in this world. He spoke his mind, his heart, and his passion through his beautiful music and leaves an incredible legacy. These are the things that matter most. My heart is truly with his wife, Jan, his son, Django, and all of the people he has touched in this world.”

Eight months ago, Crosby made headlines when he said he was done performing live, declaring, “I’m too old to do it anymore. I don’t have the stamina; I don’t have the strength.” But he said he was recording as busily as possible: “I’ve been making records at a startling rate. … Now I’m 80 years old so I’m gonna die fairly soon. That’s how that works. And so I’m trying really hard to crank out as much music as I possibly can, as long as it’s really good… I have another one already in the can waiting.” Crosby subsequently backtracked about doing concerts, saying recently that he’d changed his mind and expected to be out playing live again.

Crosby reentered the public consciousness in a big way in 2018 with a theatrical documentary, “David Crosby: Remember My Name,” narrated and produced by Cameron Crowe. Crosby spoke about his own mortality in the film, and Crowe remarked on that in an interview with Variety, saying the singer was thinking about “’telling the truth in my last huge interview that I’ll probably ever do’…”In the second question of the first interview we did with Crosby, he came right out with ‘Time is the final currency. What do you do with the time you have left?’ …What’s great is, he’s got more energy than all of us. He’s gonna outlive us all. He’s batting his eyes like he’s on his deathbed. He ain’t on his deathbed at all! Maybe it all is a con job, like he says at the end. You don’t know.”
Click to expand...

We are loosing so many of the greats.

RIP DC n thanks for the music

My favorite band, CSN & sometimes Y. It's one thing when a great classic rocker dies, it's another when it's someone from your favorite band of all-time......

My Deja Vu album from ealy 70's got thrashed to threads. I loved that album.
Sad news to lose DC.
"Almost Cut My Hair" was an absolute gem.
Very bluesy. Written by DC
i just had to retrieve my cd version of Deja Vu to give it another spin.
ah! Memories . .

I had the Deja Vu and the live double album 4 Way Street. I also wore out my copies before I picked up the CD's

There's a guy in my building, big music fan and huge Crosby fan who is a dead ringer for the guy. He does weekly karaoke gigs at a showbar crosstown. I haven't seen him yet since the news but he's gotta be heartbroken.

No wonder music is dying. So are it's creators

We just lost Renee Geyer . . an Aussie Blues/Soul/Jazz singer. No sure if she was known overseas, but a huge loss here.
She did some work with Bowie and Cocker and others too.
She was 69.
RIP Renee.
Ad