For clarity, I shall use abbreviations:

In the spring, I studied possibilities of how my Roland could control my Ketron, taking advantage of its patches conveniently. The problem was that banks/
programs – which I'll call patches – can be changed manually from the Roland, but it takes too many buttons. Live performance needs instant change to a series of predetermined patches. Following suggestions, I bought an Ipad and installed Set List Maker. It might have worked had I gotten a MIDI Hub instead of using my USB-MIDI Converter, but after trying unsuccessfully for a couple of days and seeing that patches were not changing, I returned the iPad to Apple. I quit partly because as long as I was going to have a screen, I would like to also display a text file with large print (I'm age 75). In using Cakewalk in my Dell, simply pressing the down arrow opens the next track which has its own patch. I decided, therefore, to try a small computer loaded with Cakewalk, a mini keyboard, and a 20-inch ultra-slim monitor. I also built a holder to mount the screen on my keyboard stand. This is lots of stuff, so it's not as though I can recommend this approach, but it worked. Cakewalk happens to be a free download from BandLab. Downloading it was a bumpy ride, but I eventually got it. Setting it up to recognize my Ketron and Roland, and configuring the ins/outs took much trial and error, but, as I said, it worked, and now, by pressing the down arrow on a mini keyboard stuck to my Yamaha digital piano with Velcro, I can move through predetermined patches, or even drag tracks (patches) to a new order. The set up looks somewhat like a cockpit, so maybe I should wear a Red Baron cap and goggles. 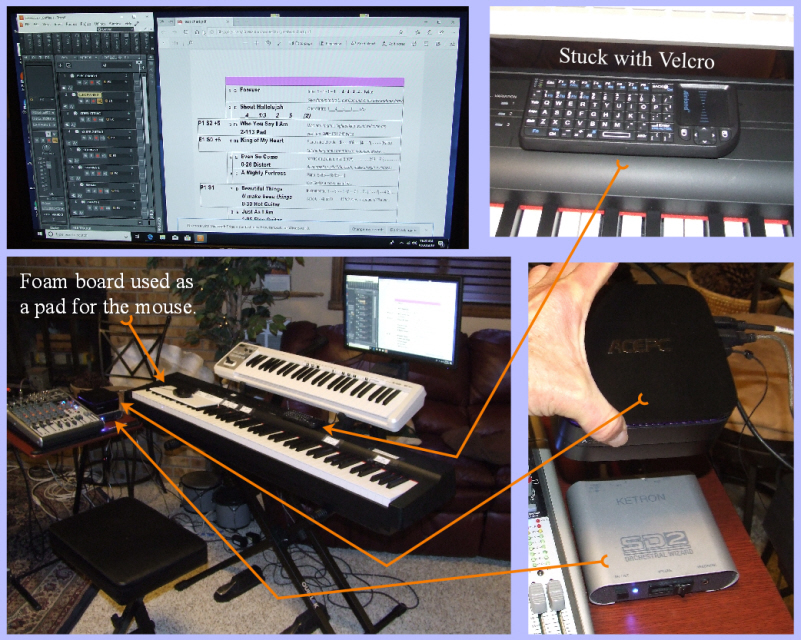 Heath Robinson would be proud of getting the setup you have.

Glad you have a working system.

Biggles said:
Heath Robinson would be proud of getting the setup you have.

Glad you have a working system.
Click to expand...

I'd never heard of him, but you're right - we definitely think alike.

As long as your system and setup work for you in the way you want or need, that's what really matters!

My "envisioning" dates to the '80s when at my Kawai E-600 (think full-sized Hammond Organ), I'd play leads/fills on the upper keyboard, chordal inversions on the lower, and bass on the pedals - wearing cowboy boots since Country was (or wasn't) cool . And, yes, I had cows and horses. My latest setup fills a wheel barrow with parts, but at least I no longer need an enclosed trailer with ramps and a singing guitarist wife to help me roll the monster into the venue.

There is one bug: if notes are on, switching patches causes them to stick, and the Panic Function doesn't send a MIDI off. I found this happened also with my iPad experiments. The prevention is to keep the left hand elsewhere occupied. The fix is to turn Ketron off, then on, and hit Play (space bar) to reset patches.

Some bright day, we will be able to connect a controller to a touch screen designed by a clever Otoko, and the screen will contain its own great set of samples with others available on memory cards .

I found a solution to the stuck note issue: Select a track. Press the Function button on Roland. Press R for record and immediately press the Panic key (first C) on the Roland. This puts an All Sounds Off in the Event List. Copy that measure and paste it into all subsequent tracks at the same position. Set that measure as a loop. Now if a note is stuck, pressing the space bar will turn it off. The shorter the measure, the quicker it works. Press the space bar again to stop the transport. To avoid having to prepare all this for each show, use the same "song" each time, changing only the patches.
Ad

I've attached a tiny MIDI file that might help you.

It resets all controllers when it's played.

Thanks.
You must log in or register to reply here.