For quite some time I have been using one of my keyboards as a midi controller for my VSTs, I have a midi to usb adapter - IN/OUT midi cables on one end and a USB cable on the other side, which I plug into my PC. This adapter doesn't have it's own driver or anything. This works perfectly, but my question is, how exactly does multiple keyboard setup work? I was searching about this topic for some time but couldn't find anything that would answer my questions. I know that MIDI has 16 channels, and my keyboard is sending data on the first one. But what happens when I have 2 keyboards that send both send on channel 1? I have read that I am supposed to change the channel on the instrument itself, however this is not the case as my keyboards aren't exactly made for midi (a CP4 stage and a cheap dgx 61 keyboard) and they don't have this option at all! So if I understand this correctly, this would mean that I will be unable to separate the midi data from those two keyboards and the dual setup would be worthless as they would act as one keyboard?

If I use another midi to usb adapter on the second keyboard and have 2 usb cables plugged into my PC, I guess I would be able to separate them in my DAW, since there would be two entries in the midi input list? (I can't test this as I have just one midi to usb adapter now). This would theoretically be the cheapest solution, but my notebook doesn't have unlimited usb slots (I also need to plug in my external hdd and other stuff, but I could make this work). And I also read about timing/latency inaccuracies between the two keyboards etc.

Usually I see people using some kind of a midi interface where they can plug in more than 1 keyboard and get only 1 usb output - but here's the problem - wouldn't this show up as only one input in my DAW, thus making this all virtually just one keyboard, or are these boxes smart enough to automatically send data on different midi channels? They never mention this and I doubt that this would work, plus they seem a little bit too much pricey for what they are so I don't wanna risk anything.

The next day I saw a guy using a usb hub, he had 2 usb cables (those keyboards alerady provided usb output) that went into a usb hub and only 1 cable to his laptop, but this would show up as 1 input again right? He had 2 m-audio keystations and I am pretty sure he can set the midi channel in there since those are midi controllers.

So that's what I currently think I know, I might be completely off and I would like to know what are my options, so any help explaining how this stuff works would be appreciated
Ad

As long as you don't have both keyboards plugged thru the same MIDI loop you can access them from your DAW on the same channel as different MIDI devices.

For illustration purposes I am posting my own MIDI setup where each device can accessed separately on any channel I specify.

This applies to modern USB devices as well as MIDI to USB adapters like My MIDIsport 4x4 with 4 complete MIDI loops that shows up on my computer as 4 separate devices. 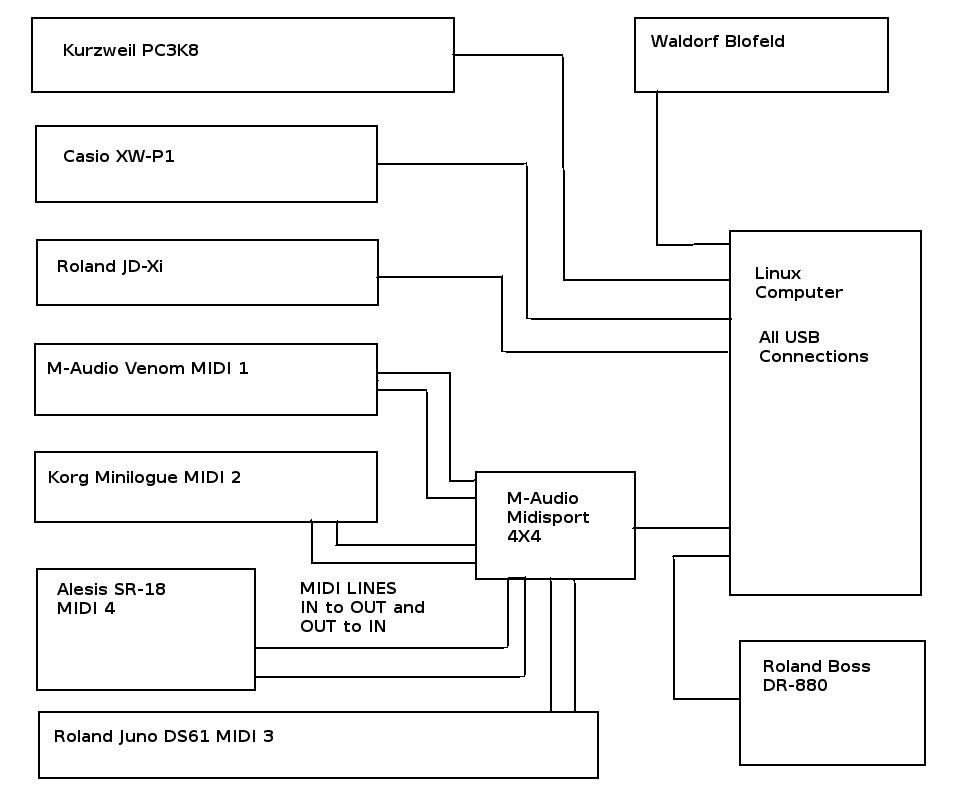 Hopefully this clears things up for you.

If you are limited to using a single MIDI loop where the devices are daisy chained, then you have to be more careful with channel selection depending on whether you wish for a device to be muted or layered on top of the other one.

BTW, if you resort to using a couple of those cheapo Chinese whizbang single device MIDI adapters be careful.

They are not designed to be ganged up in pairs or more as they all have identical USB device IDs and results will be very erratic from bootup to bootup and you'll have difficulty distinguishing one device from the other.

Better to get a multiport MIDI adapter like the M-Audio MIDIsport series and I recommend the 4X4 as it will leave you room to grow your system with time.

Whoah what a setup! Well here comes the game changer, I thought those boxes (I was actually looking at the M-Audio midisport one) will show up as only 1 instrument on my PC. This makes it much clearer, thank you.
I am a live gigging musician so I think 2x2 would be enough, I can connect a third one with my cheapo chinese adapter anytime, right? I might as well buy a proper midi controller with faders and knobs, but that's for future.

I think I finally got the idea - if a 2in/2out to usb adapter says it has 32x32 channels, logically it means the two keyboards won't use the same channels... silly me.