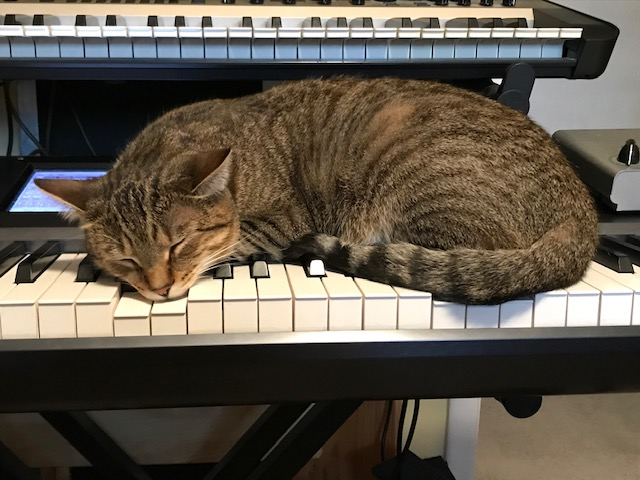 In my crystal ball I see a $300 service bill for cleaning the cat hair out of your Kronos Key Contacts.

At least! I am actually planning on taking it to Synths When to get a second SSD installed. I'll have them clean it while it's there. It's one of those "gotta do it now" projects that has been on the go for 6 or so years. You know how these projects go. My studio is regularly covered in cats. And apparently. it's cat-ching!

That image of a cat on a Kronos, literally terrifies me, unlocks some deep, primal phobia about dust and schmutz getting into my keyboards.

This is why all my boards have dust covers and I make good use of them in the downtimes.

Well, I used to have dust covers that I made out of large clear plastic bags but over the years I just stopped worrying about it. Close to 3 decades ago I was playing at an outdoor festival north of Orillia. Back then I used to be quite the bad party animal. I had this covers on my 'boards since they were set up onstage and I wasn't playing them. Of course they were plugged in but not turned on. We had already played our set and since I was expecting to play again the next day I just left them there while I got, um, let's just say well into my cups. And mushrooms, and probably other things too. At some time I managed to get into my tent and slept through a monsoon. I woke up because, A, I really needed to pee and B, the tent had collapsed on top of me and whoever I was sharing the tent with. Got up, noticed that it had rained a bit totally unaware there had been a huge storm. When I toddled over to the stage I noticed that the plastic cover was long gone and there were puddles on my keyboard. I unplugged the power cord and gently bumped it. Water sloshed out from under the keys. It was full to the top. I said some words. Probably ones that started with an "f" and tipped it over to let at least 2 gallons out. Fortunately that was the only piece of gear that got drenched. My other keyboard was under cover somewhere. Maybe I only had the one. Can't say. My keyboard amp was fine. I eventually got it home, penned it up to let it dry. After a week I turned it on and it worked. It took it a while to figure out how but only about 10 minutes.
On the positive side, my ex wife and her husband were there. PS I didn't like her then. She and he were having a threesome with another girl when the husband said something stupid which got the ex furious. She ran out of their tent naked with him in chase. In the dark, she tripped over a tent rope or peg, fell and he landed on her and snapped her leg. When I heard about this, I completely forgot about my sad Roland U20 keyboard and laughed and laughed and laughed! And then got drunk! I wasn't driving so it was good!

Good lord! What the hell happened to Jordan Rudess in that video? He looks like a 90 year old Bavarian Cheese Farmer now.

What's wrong with Bavarian Cheese? I'm not sure what he's doing. Apparently he wants to have hair like John Petrucci.

You might be right! I keep hoping to hear him play that big modular rig he has in the back there.

He uses the Modular on one Youtube Video, I think with Liquid Tension Experiment.

I've searched youtube for it but can't seem to find it.

The only time I've seen him use it is in the solo of Octavarium. I managed to catch it live too but he wasn't doing any repatching or tweaking.
Ad

BTW, I've been adjusting to my Poly D and I am stoked about just how Moogy it sounds and plays.

Between the sequencer in the Poly D and the Hydrasynth Arps the combinations for creating beats is bloody unlimited.

I'm telling you, Behringer is doing fantastic things these days in the budget synth market.

The Berhinger stuff is amazing! Once I've got all my things repaired and such, I"m interested in the Arp 2600 clone. Fist though, I need to replace my Presonus mixer. The repair price has a comma in it so that's a no go. Then I want ot start my little Moog triacter pretend modular rig! The Mother 32, the DFAM and the other one that I can't think of the name of. Then! The 2600!! If I've been a good boy!
Ad

Jeremykeys said:
You might be right! I keep hoping to hear him play that big modular rig he has in the back there.
Click to expand...