I have a Krome EX 88 connected to the Line IN on the PA1000. Audio settings on the PA1000 for Audio in are on Line (Mic and Guitar produce distoreted sound, seems logical).
Also have Kross 2 88 connect to a PA700, audio settings on the PA700 on Line gives no sound at all, but I do get sound when on either Guitar or Mic settings. Also, I have to turn the volume of the Kross 2 all the way up in order to get to the output level of the PA700.
Doesn’t seem normal to me...
@Biggles : maybe you can help ?
Last edited: Aug 1, 2019
Ad

You have to go into the global menu and select line input source, it is mike as default, so no wonder you get zilch.

As for updating to 1.4, have you followed the text instructions precisely?

Extract the Zip file to a fresh USB stick which has been formatted in the 700 then read the file named PA Series OS Update.

You have to insert the USB stick in the 700 when it is off then press and hold a certain button as you power up the 700 which will then go to the screen calibration routine after calibration the system will start the update.

Do Note
Backup first
Perform a Save All, this is important as you will need to Factory Restore after the update and use the Save All file to finish the update.

All is explained in the update document.
Last edited: Aug 1, 2019

@Biggles :
You didn’t read my post properly. I did select Line input, but that didn’t give me any sound at all. Only Mic and Guitar worked.
Line input suddenly worked but it’s a lot quieter than Mic and Guitar.
On the PA1000, there are knobs to set the volume of the audio in, not so on the PA700...

Update worked, tried a different USB drive. Mine was a 8gb, borrowed a 1gb drive from my girlfriend. Never had any problems before with mine, strange. 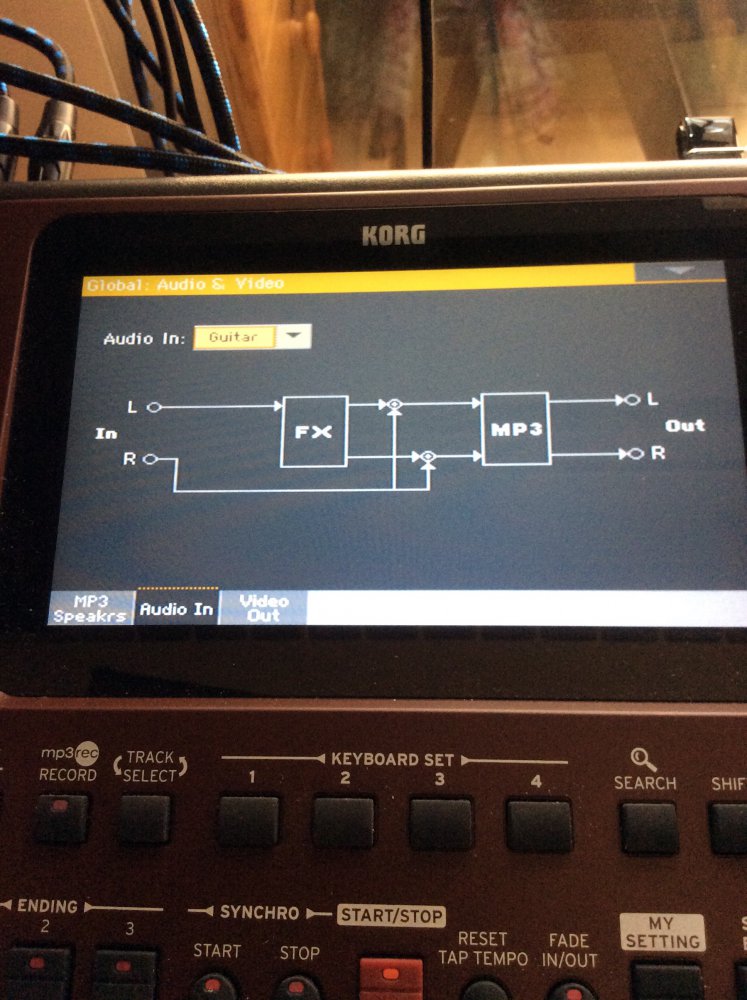 .
I told you rubbish.

There is a bug in the Korg OS and the way my Kross 2 works with my 700 is to select the Guitar as the Audio In. My Line In does not work with the Kross 2 connected.

With the Guitar selected my Kross 2’s volume control is used to set its volume in the 700 relative to the 700’s inbuilt sounds.

Do note the input routing which by passes the Fx module.

I suppose by default there are no FX applied to the signal coming from the Kross 2. The thing is, Line input works but is quieter than Mic or Guitar. If it's a bug, then then 1.4.0 update didn't fix it, don't know which OS version you have.
No problems on the PA1000, though...
Thanks for the feedback anyway !
Ad

Kaneda said:
Line input works but is quieter than Mic or Guitar.
Click to expand...

Not specific to the PA700 (which I've never used, nor I have used this feature on my PA1000), but just in general... One reason the maker of a device gives you an option like Line/Mic/Guitar for an input is that most microphones and electric guitars are passive (unpowered) devices and put out extremely quiet signals, so they will not function unless plugged into a preamp to boost their signals. (Like turntables in the old days, which is similarly one reason you had to use the special "phono" input on your stereo system.) So the Korg would have to have a preamp in there to make microphone and guitar signals usable. So when you say "Line input works but is quieter than Mic or Guitar" that's exactly what I would expect. It's the same thing if you plugged a keyboard into a Mic input of a mixer or amp, it would be way louder than if you plugged into the Line input. So I'd say it's not that there's anything wrong with the Korg's Line option, it's just that that's a pure input signal that doesn't have the added preamp boost that the Mic/Guitar options have. If you're not getting enough signal from your Kross into your PA700, even when you turn the Kross volume up to max, then I don't see any problem with turning the Kross volume down and using the "mic" option of the PA700, though it may degrade the signal some, as the additional preamp could introduce some noise (and also can probably be driven into distortion so you want to watch your levels on the Kross). Don't use the guitar option, because another difference in that case is that it expects a higher impedance, which can also impact the sound.

On the Kross 2 it is the same volume control for the headphone socket volume and for the signal volume from the Line Out sockets, as usual the Korg Kross 2 manual is lacking in content and my reading of Klingon has not yet reached the level where the Kross 2 manual makes sense.

Line outputs are normally at a constant level are not adjustable. Headphone outlet is amplified and adjustable from using volume control.
So the Kross must be different to the norm ?.

On a Korg PA there are two volume controls, or rather a main volume and a balance control for the accompaniment.

This balance control can be set in the menu system to be a volume control for the lower split if required. There is no volume adjustment on a PA for the equipment that the Line In sockets have connected to them.

The Line Input has to be adjustable otherwise its volume would be what it is, so not ideal. Hence the only way to adjust the volume of the second keyboard is via adjusting its output hence I control the volume of my Kross 2 out of the PA700 speakers via the volume control on the Kross 2.

On the rear of a 1000/700 adjacent to the left Line In socket is a gain control which is used for the Mike input.
Ad

gwc uk said:
Line outputs are normally at a constant level are not adjustable. Headphone outlet is amplified and adjustable from using volume control.
So the Kross must be different to the norm ?.
Click to expand...

I've never seen a keyboard where the volume control is only for the headphone output.
Ad

gwc uk said:
Line outputs are normally at a constant level are not adjustable. Headphone outlet is amplified and adjustable from using volume control.
So the Kross must be different to the norm ?.
Click to expand...

That is more or less the case with HiFi and Audio Visual kit but not necessarily with keyboards.

Usually my Kross 2 and PA700 feed into my Mixer which in turn supply my powered PA speakers (PA700 amp and speakers turned off in Global). Where I can adjust the Gain if required and also adjust the Eq and also the Volume of the signal going to the powered PA kit at the Mixer if required.

Quite a few of the regular contributors here have similar setups.