I've just about finished developing Live MIDI Manager for my uni project. Thanks Gary for your input back in April (https://www.keyboardforums.com/thre...ion-live-midi-manager-feedback-welcome.31004/).

In short, LMM allows MIDI data (note, velocity and channel attributes) to be altered before being sent to a DAW. This was added due to MIDI keyboard and/or DAW shortcomings. I've tried to make the program widely usable by not tailoring it for a specific DAW or OS. I've been using it primarily on Windows 10, but also recently managed to set it up and use it on the Raspberry Pi 4.

MIDI data can be altered to play multiple digital instruments simultaneously and to change the settings of each instrument (including the octave, velocity curve and the velocities of specific notes – see screenshots) as required prior to recording.

User feedback led to the addition of buttons to set the note ranges of each instrument by pressing the keyboard key (in addition to using the low/high note list widgets). The option to play all instruments at once (as opposed to assigning them to separate keyboard zones) with each of their individual settings still applied has also been included.

Other features:
I'm aiming to make the code available on GitHub after the project (and no doubt a bit of further tweaking). If anyone has any improvements in mind, please feel free to suggest them. If you include your first and last name, I could cite you in the project report. 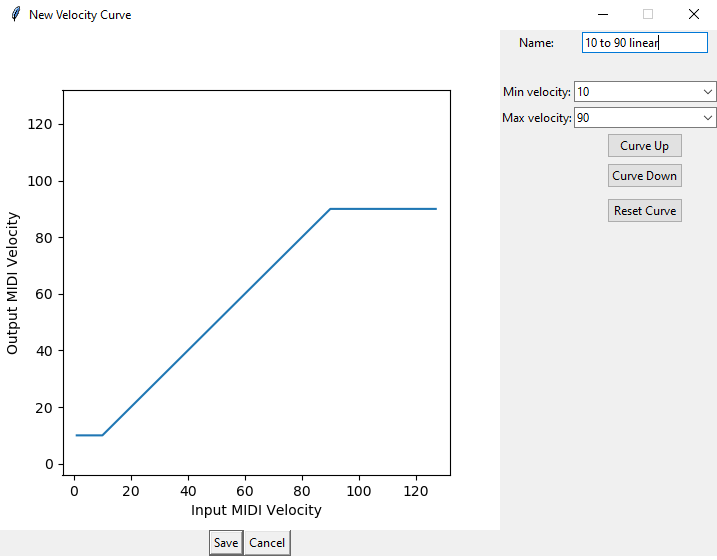 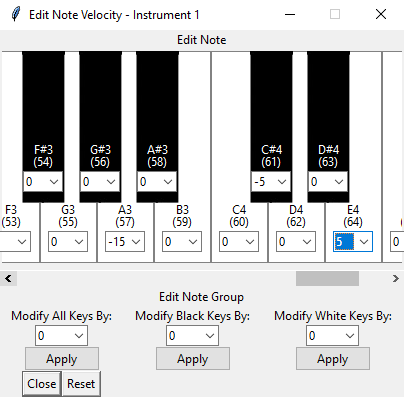 Sounds great John, but could you post a link to the github page? Searches come up either blank or irrelevant.

Thanks for the kind words. I'd like to put it on GitHub now, Gary, but I can't risk it until after the final assignment due to the online checking software used by the markers. The expected module result date is the 8th of December so it should be on there in time for Christmas. I'll post again then.

Understandable... There are thieves, there are damned thieves and there are academics

Looking forward to seeing a .deb package or at least a tarball when you finally post it.

Good luck with your degree

Best wishes with your studies.

Think about monetising your finished App, and including some form of anti piracy functionality.
Ad

Biggles said:
Think about monetising your finished App, and including some form of anti piracy functionality.
Click to expand...

Are you insane? Open source DESPERATELY needs GOOD programmers to fight the software oligarchy that supports that stinking Redmond, WA. OS, whose name I cannot utter without spitting on my clean floor!!!

Getting paid for writing a software suite is vastly different than simply writing up a single utility that would earn a couple of hundred in chump change as shareware and end up being forced to support it ad nauseum for your paid "subscribers."

The MIDI software market is so tight already that Cakewalk had to go out of business after 40 years and got snapped up by Bandcamp and is now entirely free of charge, supported, I can only assume, by advertising.

Please, John I beseech you. Do not join the dark side of mediocre programmers who try to earn an early retirement releasing nickel and dime adware and shareware for the ever growing sea of brain destroying cellphones out there.

Stay true to the original software/hardware hacker's credo: "Information WANTS to be FREE!!!"

Thanks Gary and Biggles.

Given the time and effort it takes, I don't blame developers for wanting to monetise their work, though I've decided to make it open-source to give something back to the music community. It seems fair since LMMS was the first DAW I used and I'm now using Qtractor (and numerous open-source effect plugins).
Ad

While I respect the fact that everyone has to pay the rent to the best of their ability, it is always nice to see someone pay it forward and make a contribution to the open source MIDI community. Hopefully you will overcome the annoyance of constantly maintaining the program and updates as required while you are busy with a paying job in the software industry.

Good open source MIDI programmers are scarcer than hen's teeth. One project, MIDIOX has been around for decades and is a simple utility to view a MIDI stream in real time. Keeping the program simple and basic goes a long way to the longevity of such a program and eliminates the need to update frequently.

These sorts of projects are usually a labor of love.

If you plan on a professional future in MIDI programming then you might be better off joining one of the large software houses and working on their program suites. If you plan to go it alone and monetize your own suite of MIDI utilities then be prepared to live in a cardboard box and live on mac and cheese because the competition out there is stiff.

Cakewalk went under after 40 years in business last year and is now fully supported freeware courtesy of Bandcamp.com and it was once the sequencer of choice for professionals in the music and motion picture industries. In fact, it has a huge, loyal fan base who still use it in its current incarnation for all sorts of professional projects. Personally, though I'm not a professional musician I still run it under a virtual machine as well as an ancient version I bought in 1998 which still runs beautifully under Wine.

In fact, if Cakewalk had a flaw, it was that it was too good for its time and the eventual transition of the original company to a subscription model put the final nail in its coffin