What midi sound module is best for a me...

Before i spend ££££`s on another new keyboard ,could someone please advise what i can use on my set up now.

I don`t record ,make new rhythms ,or use much of what even mine is capable of now.
I just like to sit down down for hours and play lots of oldies with my set up.

All i really would like to change is the strings and maybe the piano sounds.

I keep watching the demos for the Genos strings and would love to have a sound like that.

I have midi input and out puts on my organ .

Do i use a sequencer or a sound module , either PC set up or whatever is likely to give a better result.

Sorry to be vague , but all have ever done over the last 20 odd years is play and never used midi connections but i know they are there for a reason !
Thanks
Ad

You say it's an "organ" with MIDI IN/OUT ports, but that doesn't tell us what its MIDI capabilities are as far as how many MIDI channels it can send and receive.

In your other post you mentioned having played a Clavinova, a Tyros5, an Orla Grande organ, and a PSR-9000, so I'm guessing your current instrument might be one of those-- perhaps the Orla Grande? What make and model is it?
J

You say it's an "organ" with MIDI IN/OUT ports, but that doesn't tell us what its MIDI capabilities are as far as how many MIDI channels it can send and receive.

In your other post you mentioned having played a Clavinova, a Tyros5, an Orla Grande organ, and a PSR-9000, so I'm guessing your current instrument might be one of those-- perhaps the Orla Grande? What make and model is it?
Click to expand...

Oops ! Every detail except what you need ,
Yes ,i`m using a orla grande theater now, i don`t know what channels it uses , i could look in the manual and find out.

If you have a USB Host port on the keyboard then connecting a standard A to B USB cable between the keyboard and your Computer will possibly allow MIDI functionality.

You can then attach the interface to your PC, MAX or iPad via a USB A to B cable.

You will find that there are some MIDI to USB cables on sites like Amazon for a few $ € or £ but these can be problematical.

Given the possible age of your Orla and the computer operating system you are using you may need a Driver installed for MIDI to function.

Hence before you part with any cash a bit more research will help determining the feasibility of what you seek to achieve.
A

Google tells me that the Orla has standard MIDI In and Out jacks, which means you can connect it to any sound module, or to a computer (no driver needed).
J

Can anyone recommend a sound module that would be good for strings and maybe piano.
Thanks
Ad

There aren't a lot of sound modules being made these days, so you'll find a better selection among computer VSTs and even iPhone/iPad apps. But if you prefer a standalone module, one possibility could be the Roland Integra 7, here are sound demos:

#20 through #24 are strings. Though there are a lot more string sounds in it than those.

Could you post a link to the Genos string demos that you liked so much? That would provide an idea of the kind of sounds you're looking for.

The Roland Integra 7 is one of the most well used Sound Modules but these rack mount units are not now as popular as they once were and at c$2000 they do not come cheap. Dexibel Vivo is another slightly cheaper sound module.

To see the direction that the industry is being lead via manufacturers check out Roland’s subscription based Zen system.

As an alternative to MIDI you could consider a lesser cost Arranger like a Korg Pa700 or Yamaha SX700 both of which retail for about £900.

One company that's still gung ho for modules these days is Ketron in the UK. They range in price from a couple of hundred to thousands.

If all you are looking for is strings then maybe look at the Waldorf Streichfett.


The Integra 7 is dated but amazing sounding but also overkill and a budget killer for your needs.

Honestly if all you plan to do is play MID files from your computer a Ketron SD2 or SD4 is all you really need.

What you really need is just GM GS and XG capacity as well as as many voices as you can get (anything over 64 voice polyphony is fine) and multitimbrality.

The Ketrons I mentioned have all of these specs. I think the SD2 would serve you well enough.

The cheapest USB-MIDI interface for connecting to a computer that is known to be reliable is probably the iConnectivity mio; it's been verified to work with older keyboards that the really cheap interfaces don't work with.

By "sound module" I've been thinking you might mean software ("virtual instruments" or "plugins") in addition to a hardware module. There are many software instruments or plugins available, which may or may not require some sort of plugin host program. Pianoteq is supposed to be a good one for piano sounds that I've heard of but have no experience with. There are some good free plugins, but usually the best ones cost money, with prices varying quite a bit depending on how sophisticated the virtual instrument or "VI" is. Some companies that produce VIs are AIR Music Tech, Arturia, Avid, UVI, and too many others for me to remember right now-- but those are some of the ones I've bought VIs from.

Do you have an iPad?

If you do then the Mio that Michael suggests plus an Apple Camera Connection unit will enable you to use Apps on the iPad with your organ.
Ad

Excellent !
Thanks!
Never knew any of these products existed , i knew midi sockets were for something.
I have searched through you tube on various apps ie. Beat hawk and others listening through a good speaker system and the reproduction is amazing.
So it seems i can still use my organ as a keyboard to play these apps through a i connectivity mio lead from either a ipad or a PC.
I always thought it was only available on separate midi boxes , but these apps are great.

I`m going to be busy for a long time now experimenting with what i like ,not what is sold in expensive keyboards.

I attached pictures so as if you guys could see if what my organ has , and if it should work ok.

This is the problem with growing up and being taught in a analogue era , lots to learn!
Thanks all for your help again.

Just fyi, the MIDI Standard has been around since 1983.

How old are you?

happyrat1 said:
Just fyi, the MIDI Standard has been around since 1983.

How old are you?

So actually I'm a couple of weeks older than you are.

Nobody around here would call me a technophobe.

I've been using MIDI with keyboards and computers since 1998.

happyrat1 said:
So actually I'm a couple of weeks older than you are.

Nobody around here would call me a technophobe.

I've been using MIDI with keyboards and computers since 1998.

Not so much of a technophobe , i actually like gadgets ,just never really got involved in midi , seen it there, knew it was a pc link of sorts but thought ,i don`t need to fiddle with that , my keyboard is ok as it is .
Now i`m getting more fussy as i get older , and now i found a cheaper way to get new controlled sounds without shelling out ££££ on a new unit.
I have some catching up to do
Ad

You might want to do a little reading up on the protocol if you hope to learn how to use it effectively.

Here's one to get you started. 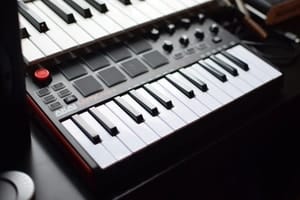 A Beginner’s Guide To MIDI: What Is It? How Does It Work? | Musician's HQ

MIDI is a word you will see thrown around a lot when reading about recording music at home. As a beginner, I owned and used a…

You can join the MIDI Association for free. Note, this isn't the same thing as the MIDI Manufactuters Association, which is for companies and individuals who manufacture MIDI hardware and software, and which costs money to join. They're related, but the MIDI Association is for anyone who's interested in learning about and using MIDI, and is free to join. There's a forum where you can ask questions, and you can download the official documentation for the MIDI specifications. If you're interested, check it out at their website-- https://www.midi.org/.
J

Back again !
Can anyone tell.me please which of these sockets in need to use on my organ.
I have a mio connection with a in and out plug but have 4 on my organ.
Which 2 did i ought to use .
Thanks again
Attached picture

The MIDI IN of the mio needs to go to the MIDI OUT of the Orla.

The MIDI OUT of the mio needs to go into one of the MIDI IN ports of the Orla, but the question is, which one? The answer will depend on what you're trying to do-- and in the situation you've been asking about (namely, using the Orla to play an external sound module) it doesn't matter whether you choose MIDI IN 1 or MIDI IN 2, because right now you aren't planning to send any MIDI messages to the Orla.

However, I think the MIDI IN 1 (KEYB) port is used if you want to send MIDI messages to the Orla and have them affect the MIDI channels associated with the panel settings-- that is, with the "keyboard parts" that you manually control with the keyboard.

In contrast, I think the MIDI IN 2 (DISK) port is used if you want to send MIDI messages to the Orla and have them affect a second set of MIDI channels which are separate from the keyboard parts, and which are often called "song parts" on some keyboards because they're used for playing back MIDI song files that you can play along with using the keyboard parts.

Note that "parts" in the previous two paragraphs refer to "musical parts," comparable to the way that music might be written for a tenor part, a soprano part, a first violin part, a second violin part, a clarinet part, a lead guitar part, a rhythm guitar part, etc.-- that is, it refers to a particular role filled by a given instrument and performer, not to a physical part of a machine.

The MIDI THRU port is something you don't need to worry about unless you want to connect a third device to your setup. Any MIDI data being sent to the Orla's MIDI IN port can be passed along, or sent through, to its MIDI THRU port so it can be sent along to another MIDI device.