Which Amp is powerful enough? And not too heavy?

I play with a loud metal band. My Roland KC550 is more than powerful enough. The problem is not the amp, it’s my back- I can no longer lug the 63lb KC550 around.

Other brands seem to work differently. The Behringer Ultratone is 600 watts but only 40lbs, and the Peavey amps seem to have totally different wattage. I don’t really understand the electronics, wattage etc, so I don’t know how to gauge the power of an amp.
Ad

I share your pain, I also have back issues, its not fun.

Twice a year I go to an Instrument Fair where in the c500 seat area set aside for performance artists there is a single PA system that they all use. The genres of music played arefrom folk, through blues and rock to heavy metal and they all sound great through the system

The PA is a Bose L1 which is modular and as I understand expandable, it consists of a tall column speaker unit of only a few Kg in weight to a Sub Woofer that is c20kg

So do check it out if this seems of interest.

My local keyboard store has a Yamaha Stagepas system setup to use when playing aeyboard. It is quite light at c25lbs per speaker and they sell it as a kit of two speakers plus mixer, the system does sound great even when I play through it, which must be testamount to the quality of the PA, it is certainly not due to my limited keyboard skills.

We also have a Stagepas system at an organisation whose meetings I go to but it is used purely for the spoken word and the system is light, quick and easy to set up and the quality of the sound is excellent. Do check these out if such a system is powerful enough for the venues you play at.

I am struggling to thinkof anything else that is powerful yet light in weight.

eg a 15” Behringer 1500W powered speaker is c56lbs and ai for one wouldnot like to be hauling that from the Van to the stage and so many seem to fallinto this weight range.

Hopefully one of the other members here can also provide advice on a system that can help further damage being inflicted on your back.

There is very little correlation between wattage figures and volume. Three problems:

* different companies don't measure wattage the same way. Is it peak or RMS? Over what frequency range? With what level of distortion?

* some systems add up wattages that go to different components, which can be deceiving. Like the original QSC K series, which they said was 1000 watts continuous, but was based on an amp that sent 500 watts to the low frequency driver and 500 watts to the high frequency driver (presumably because the kind of amp they used was cost-effectively implemented as a matched pair, i.e. a stereo amp that was 500 was per channel). What's deceiving about this is that high frequency drivers don't require nearly as much power. So if 500 watts was going to the woofer, the tweeter would have needed under 100 watts to keep up. So the extra 400 watts available to the high frequency driver was unnecessary. That 1000- watt system (500 w LF, 500 w HF) would play no louder than if it had been a 600 watt system (500 w LF, 100 w HF).

So look more at the SPL specs if you can find them, rather than the wattage specs (and even more so if you are comparing across different brands).

As for weight, one reason you see weight/power ratios that are so different is that different kinds of amps can be heavier or lighter when producing the same power (Class D amps are lighter). Other things that affect the weight is that cabinet materials can vary a lot, and also the weight of the magnets on the speakers (neodymium is lighter for comparable performance, but is more expensive).

I ditched my keyboard amp as an output source several years ago. By today's standards keyboard amps are considered lo-fi. they're heavy and average sounding. in contrast I now use a PPA (Powered PA) speaker. Mine is an EV ELX112P. the SPL (as anotherscott mentioned above) is 132dB/1W. My keyboard amp was 81 pounds, my PPA is 37; My Keyboard amp puts out 150 watts, the PPA puts out 1000 watts; the keyboard amps SPL is unknown (unpublished) and my PPA is 132db/1W. Side by side I can tell you that my PPA is much louder than my keyboard amp, the PPA's sound is much clearer. In contrast the Keyboard amp sounds as though a blanket has been thrown over the speakers. There are two advantages that the keyboard amp has over the PPA: 1) the mixer is built in, i.e. it has 3 inputs with bass, mid and treble controls on each channel and channel reverb, The PPA has two inputs but no EQ settings and no reverb, so I solution this by first running the outputs of my keyboards through a mixer, then output the mixer to the PPA. so there is an extra piece of equipment to account for. 2) Because the keyboard amp is "lo-fi" an organ emulation sounds better through it. Hammond organs using leslie speakers as their output source and leslie speakers are considered lo-fi, so the match is better. Pianos need a hi-fi source to sound their best, so an acoustic piano emulation sounds far better through a PPA than through the keyboard amp. Overall though the PPA sounds way better, is lighter and the EV's are not that much money (relatively speaking). I would look at this route before investing in another "keyboard amp". Here are some to consider: 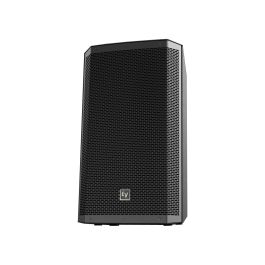 The QSC K10 10" Powered PA Speaker offers exceptional power and performance from an extremely compact system, and it can also be used as an ultra low-profile, horizontal wedge or side fill.
www.123dj.com

Both and Delaware Dave have pointed you in the right direction. I recently upgraded from a Motion Sound amp to a pair of Yamaha DXR10 powered pa speakers. The PPA speakers are 131 max SPL and can get very loud while maintaining clarity. These DXR10's are Yamaha "FRFR" units (Full Range Flat Response) which are akin to a studio monitor type sound reproduction. One DXR10 weighs 32 pounds. Don
P

Me too. im running a Yamaha DSR12 - more bottom end than the 10s. Its heavier than the DXR but its the next range up (more power, larger tweeter etc).
Ad

I just bought an HK nano system. Two small powered satelite speakers about 4” cubed that run off the base unit housing a 10” sub. The satelights are stored in the base unit for easy carrying. HK rate this unit at 750 watts and suitable for a crowd of up to 80 people. It’s very loud and easy to carry. You can mount the two satelites on mic stands or use HKs own which come in their own cute carrying bag with 6 metre cables. HK also make a mono stand that screws into the base with two satelites fixed directly on top with the audio cable running up inside. These are amazing units that are not expensive and sound great. I’ve used mine as a pa with four vocalists and a keyboard running through it. Highly recommended. HKAudio.com