I'm new here. I have an old MPK mini mk2, but recently picked up the new MPK mini play mk3, and noticed that in instrument mode the joystick not only controls pitch bend and modulation, but also expression! I thought, "Wow, this was a brilliant use of the joystick!" The only trouble is, the functionality seems to be limited to the built in instrument mode.

If you're familiar with the Akai MPK mini and its quirky little joystick, you know it typically controls pitch bend and modulation. Normally the modulation functionality is simply duplicated across the axis. The function is the same in either direction: you start at 0 and go up to 127 depending how far you push/pull the joystick. But unlike a typical mod wheel, it always resets to zero.

Now this is where the Akai MPK mini play introduces an interesting change in functionality, one that I think makes the joystick more than just a quirky controller. In one direction, you have the modulation (CC1). In the other direction though, it controls expression (CC11), allowing you to dip the expression value down to 0, and bring it back up to 127 when the stick re-centers. This is brilliant!

The only trouble is, for expression to work in this manner, the value has to be inverted so that it's 127 when the stick is centered and 0 when it's pushed to its limit. There doesn't appear to be any way to invert values when using the program editor. You assign a different control change number to each direction of the axis, but the value is 0 when the stick is centered. 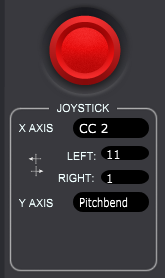 Does anyone know how to set this up outside of the built in instrument mode?

The MPK Play is a piece of junk, at least the one that I bought was.

The keybed was terrible, inconsistent, all over the place, sometimes sounding, sometimes not. Buttons had zero feel and some worked others required a heavy jab.

The volume from the inbuilt speakers was non existant.

It was sent back for a full refund.

Hence if anyone buys one of these do check the returns policy.
Ad

I actually like it. I wasn't so sure at first, though. Felt like I had to really hammer on it to get a response, but as I played with it more and got to understand it better, I began to really appreciate its differences and qualities. When compared to my old MPK mini mk2, I think the keybed, knobs, and pads are all an improvement over the previous generation.

The keys of the mk3 aren't a monoform piece of plastic like they are in the mk2. The keys are individual, and if you look closely near the action frame, you can see each is unique and labeled with its respective note. The keys also mount to the action frame with springs like some of the more expensive keyboard. The action is still somewhat stiff, but it does feel better than the previous gen. With the built-in screen of the mk3, there's a hidden option to adjust the velocity curve and black-key velocity multiplier.

Hold the "Full Level" button down for 5 sec to enter/exit the velocity settings menu.

After bumping up the velocity curve, and Full Level enabled for pads, I had no trouble playing and getting a descent sound from the built-in speaker, without having to hammer on the keys and pads. The sound from the built-in speaker was actually better than expected. I primarily bought this for my daughters to play with, and they have had no trouble with it.

With headphones on, I actually prefer playing with the original velocity curve values shown in the photo above. The drum pads also feel and sound really good. There's more range in sensitivity with these pads, and I really like the aftertouch on them, too. Especially with note repeat.

The knobs are something else. There aren't many midi controllers available with built-in sounds at this price point, and with such a small form factor. Most usually won't provide much control over the sound other than instrument selection. With the MPK mini play, you have control over brightness, timbre, reverb, chorus, attack, release, and low/high EQ. There's a massive amount of possibility with that many options. And the convenience of having the controls all mapped out and have it just work out of the box cannot be undersold. I think this is a really good first step for anyone interested in sound design without being overwhelmed by the complexities of an actual synth. It can be used to produce some good sounds and samples.

More than anything, it's worth noting that it's just fun to play with. There have been genuine quality of life improvements with this version of the controller, and you don't need a computer to use it. Although, I would like to see an option in the program editor that allows control change values to be inverted on the joystick so that it can be better utilized with more than just pitch bend and mod outside of instrument mode.
Last edited: Apr 28, 2022