HELP I got an old Accordion with Midi interface

Refer to the drawings on page two of this thread.

In those pictures, the three integrated circuits I can read part #s on are all 5-volt devices. The same is true of the SN74LS164N devices you showed on the display board picture.

If you want to humor an old man...... using your ohmmeter function on your DVM, on the lowest-resistance scale,
first, touch your two probes together tightly, and record the resistance you read. The probes should be touching nothing other than each other.

Now, with no power applied to the accordion at all, measure between pin 14 of the SN74LS14N chip (see attached sketch) and all three of your MIDI connector pins, one at a time. Record each of these readings.

Now, in like fashion, measure between pin 7 of the SN74LS14N chip and all three of your MIDI connector pins, and record each of these readings,

I'm expecting that you will read a very low resistance between the chip, pin 7, and pin 2 of the MIDI connector. If you measure a resistance of less than 1k ohms between chip,, pin 14, and MIDI pin 5, try reversing the polarity of the probes.

If your system is intended to be powered through pin 4 of this cable, at 12 volts, I think you will see a resistance of greater than 1k ohms between chip, pin 14 and MIDI pin 4, indicating that a regulator is in the path.

I'm wondering if the regulator was outboard, like included in the MIDI adapter. In this case, 5 volts would arrive at the MIDI connector and you will see a low resistance between chip pin 14 and MIDI pin 4. 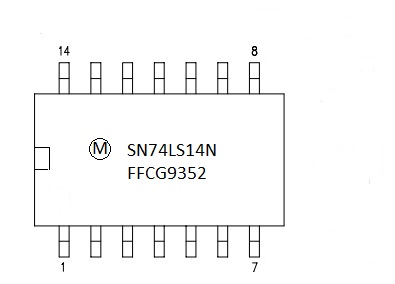 Thanks. Im trying this now but i struggle to get any readings as all readings start at number and goes down to 0 in a second.

I tested the vmeter resistance which is zero.

Pin7 to pin2(port) shows zero. And is the only midi pin to make the vmeter even budge, berfore i reaches zero.

I tested other pins as mentioned too. And i had to set meter to continuity (2ohm) to even get e reading. Most results 1.8o

I unscrew the board and took a picture behind. 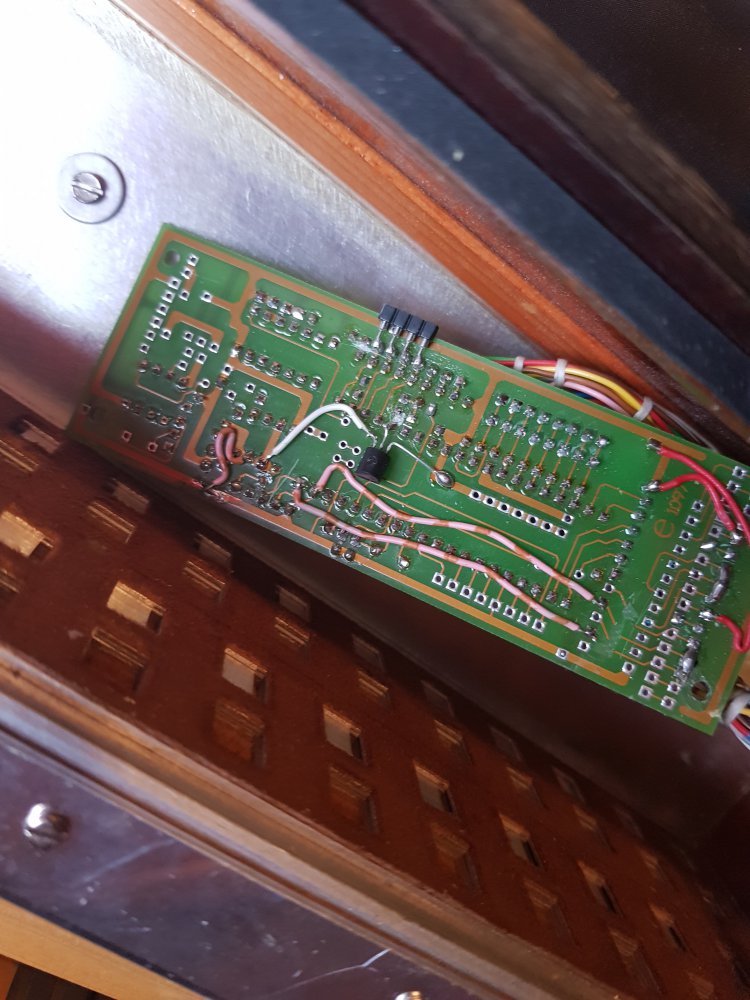 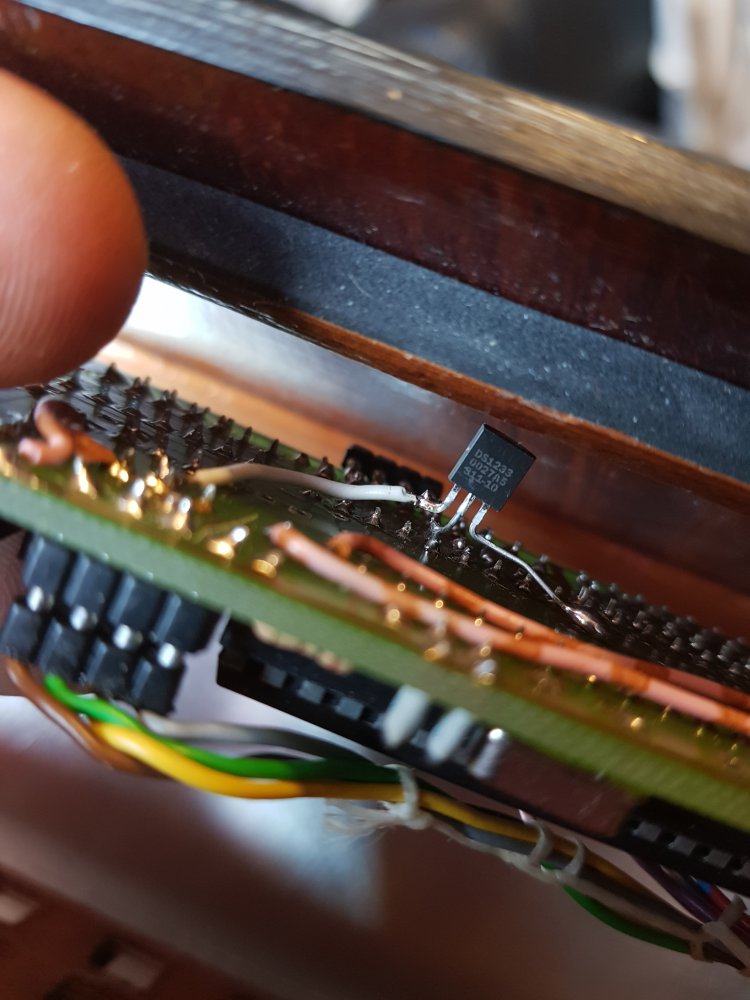 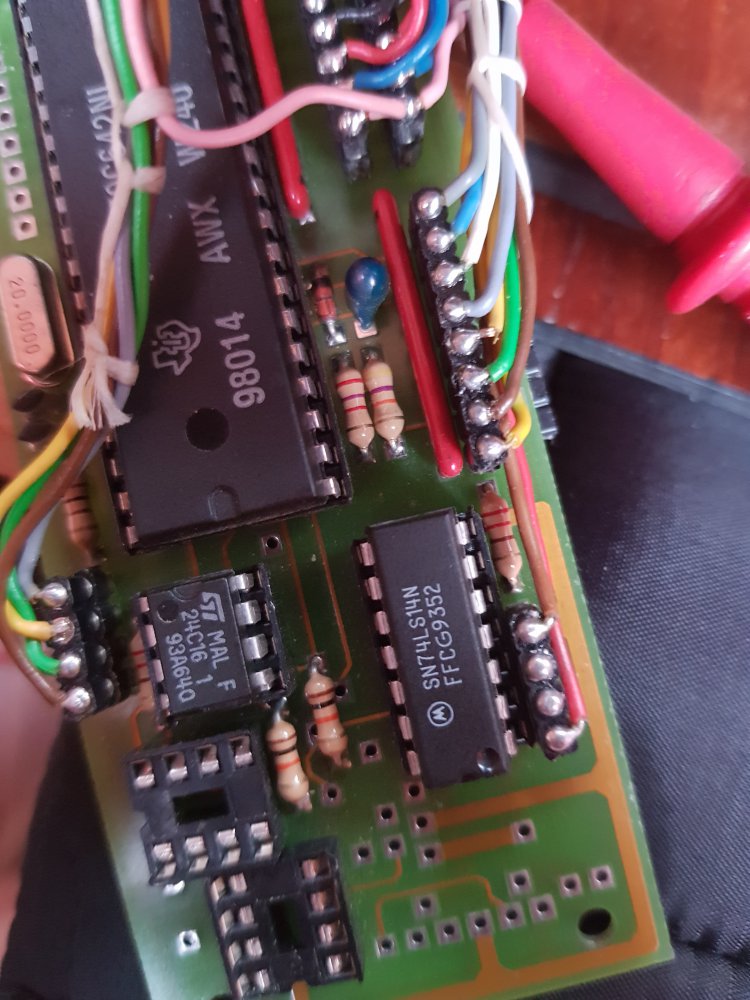 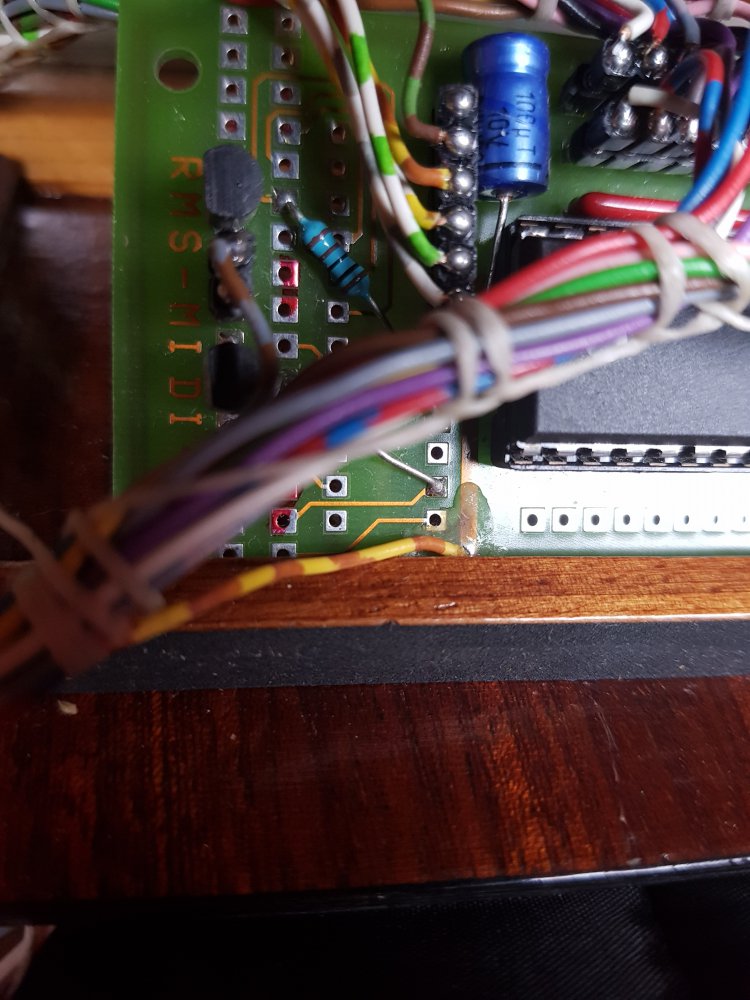 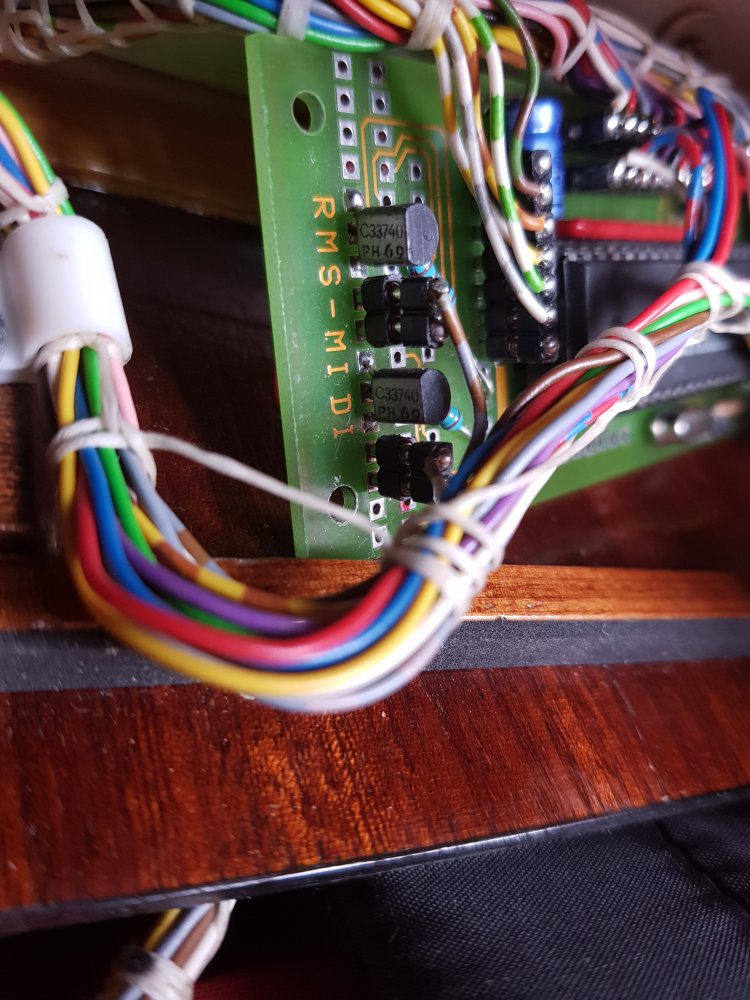 Things have turned. I set me meter to max ohms.
200M and now i suddenly get stable readings!

Thats a big (M) not a small, so its not mili ohm right? 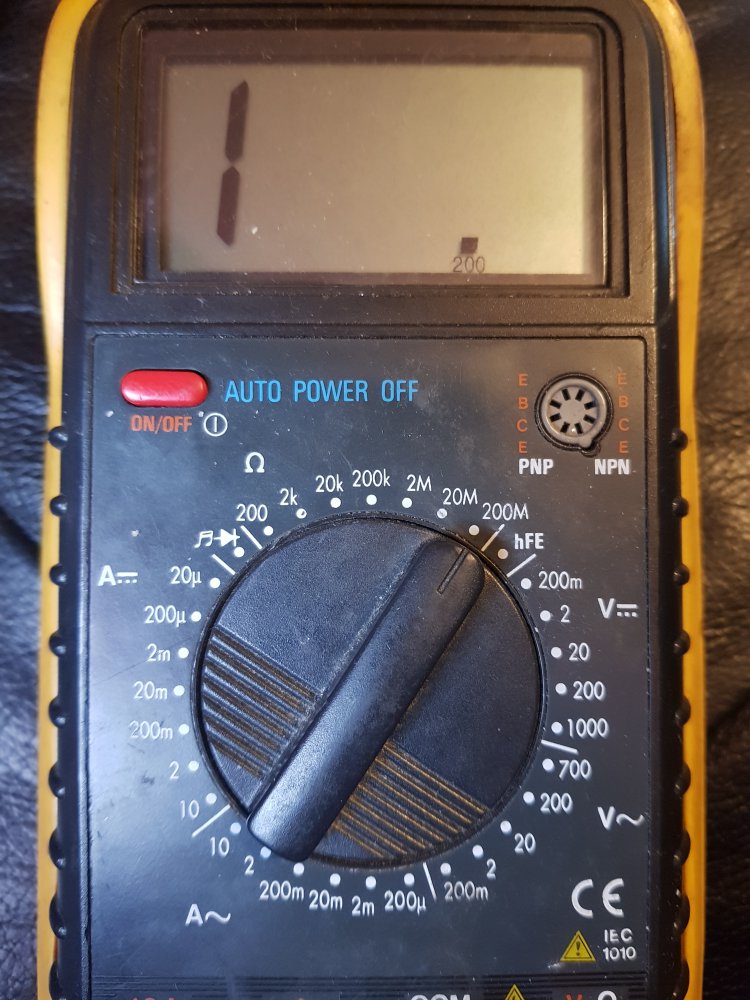 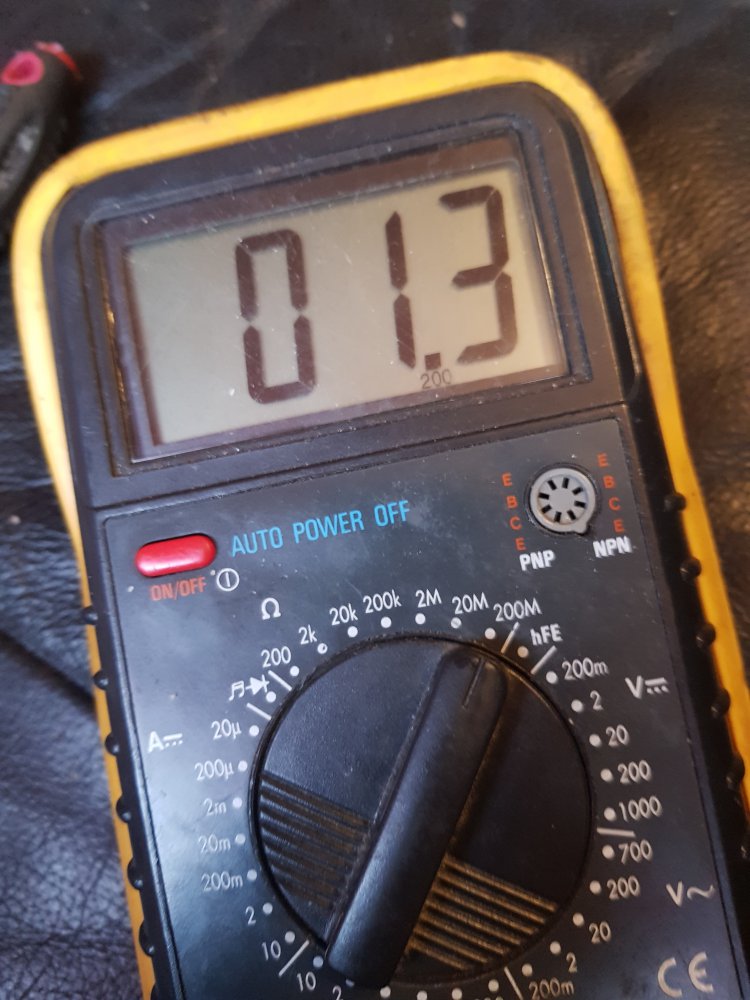 The 0 ohm indication you get using the low scale between chip pin 7 and MIDI pin 2 is consistent with our "picture" that @happyrat1 sent you. I think this shows that the circuitry is intended to derive it's power supply return through the MIDI pin 2.

I didn't catch (I will re-read) a measurement between chip pin 14 and the MIDI pins 4 and 5. I see that it looks open between MIDI pins 4 and 5 and ground (chip pin 7), and this is consistent with the @happyrat1 schematic, also.

Could you please measure with the lowest resistance scale between chip pin 14 and the MIDI pins 4 and 5 ? Or pass along the result of this measurement if you already did ?......

Another useful verification would be to use the 2k ohms scale to measure the 220 ohm resistor that @happyrat1 asked for in the power supply lead. One end of the resistor should be disconeected, or not plugged in when the measurement is done. This will serve as a "sanity check"

When a midi interface is to long without power it can loose all the information
Last edited: Jul 1, 2019
B

Thanks for reply.
Sorry i was unclear.
With meter set to 200M,

I was not able to obtain any readings with meter set lower than this, which is why i struggled in the beginning.
Between 14 and pin4-5 i get just blank reading with meter set to 2k.
I have no idea if my meter works as supposed,
But if i set it to continuity i actually get a reading.

Now i dont know how this happened,
But setting meter as low as "Continuity" which said (2) on meter, i dont know if 2ohm or 2k ohm when set at continuity, but it did not beep,
And however showed 1.8xx between pin2 and pin7 (chip).
I got same reading for pin14 and all midi pins.

I actually had to up the meter to 200M to get the readings as i listed.
B

Edgar Scheffers said:
Even when it is a 5-din connector on the Accordion I think your missing the 5 volt power adapter that must be connected between the interface and midi in
Click to expand...

Hi, i actually made a adapter like @happyrat
Suggested first.
Supplying the 2a 5vdc externally into the accordion.
It didnt power up eventually.

The system havent been powered up in maybe 20 years
Ad

I had the same kind of problem with a Italian brand Master midi, this brand make only midi systems For accordion
The problem I had that the interface was totally emty by loosing power.
Hard to find chip.
Only thing that was possible to installed a New midi system

Here is what a accordion midi guy said about the system i have. (He installs only newer systems but worked on a few powersupplies for my system some years back):

Google translate:
Pin 4 and 5 lead MIDI data and separate Normal from the other cables. The RMS Power has inside the accordion been short-circuited between 1-4 and 3-5 while 2 is likely to be Earth

If the actual midi2usb needs pin 1 and 3 aswell to fire it up? Anyways that doesnt help with power supply.

So far we have only talked about one MIDI connector. Does the accordion have two MIDI connectors, or only one ? If only one, does it function as MIDI out or as MIDI in ?
B

tjw said:
So far we have only talked about one MIDI connector. Does the accordion have two MIDI connectors, or only one ? If only one, does it function as MIDI out or as MIDI in ?
Click to expand...

Accordion has one midi socket.
I dont know if its in or out. There is nothing mentioned. But it is a midi interface that should work just like a keyboard connected to the computer.

My midi to usb cable has two cables on it after the usb. (To midi in) (to midi out).

What i understood so far is that this system was hooked up with a powerbox.

One cable from instrument to powerbox.
(5pin cable, but only pin 2,4,5 has wires in the actual instrument)

The powerbox then was plugged to the wall and also had another midiport to further route the midi out of the box again and into forexample a soundbank, pc or anything.

Right now im confused as the accordion guy that worked on this exact system once, said he think it was a 12v supply.

But another guy suggested 5v.

All components so far indicate its a 5v supply.

I have tried hooking up both 5v and 9v, and the system wont power on.

Im starting to wounder if the actual original powerbox in some way needed to tell the midi interface to power itself on, so just hooking up some power into it as is, isnt enough.

I start woundering if what i need is a midi thru powered bank, just like those powered usb hubs
Last edited: Jul 1, 2019
Ad

The person who worked on the exact system may be correct, saying it was a 12 volt supply. The reading you get between chip pin 14 and MIDI pin 4 looking "open" may be telling us that there is a voltage regulator inside the accordion that we are not seeing in the pictures. But this is pure speculation based upon some designs I have seen in the past. I don't have any real knowledge of this instrument.

I have never seen any data on this accordion or the unknown powerbox, and I've never worked on MIDI instruments at all, only played and used them.

I just began to think that the connector we were discussing was not a standard MIDI wiring, even though it used the same pins as MIDI does.

A standard MIDI port uses 2 connectors. It makes perfect sense that a powerbox is employed to convert standard MIDI connections to this proprietary hookup on the accordion.

Thanks @Edgar Scheffers for that info..... that makes more sense to me now
Ad

tjw said:
Thanks @Edgar Scheffers for that info..... that makes more sense to me now
Click to expand...

Basicly a accordion midi interface, is nothing more then a midi controller dat only sending out a data signal
Normally Channel 1. Right hand, Channel 2. Chords, Channel 3. Bass and optional Channel 4. Second voice right hand.
With controls on the accordion are multiple channels needed for programming and control of whatever you want to connect.
Most midi interfaces can work between 5 and 12 volt variable.
You must log in or register to reply here.