Looking for smaller board with full size weighted keys

Can anybody recommend smaller synthesizers with full size weighted keys? For my fiance. She has a DS88, her main board, and a DS61 on the upper deck but she doesn't like it and wants full size weighted keys but not another full size 88 keyboard. Also she wants to find better horn sax and synth tones as the 2nd board is usually for those sounds. Honestly we haven't gone deep into the DS tones but we see players with better lead tones on other instruments. She does have the new AX-EDGE keytar but you can't use that when you have to use 2 boards for songs like Come Sail Away et al. Thanks!
Ad

There's not a whole lot of keyboards with 61 or 49 keys that have hammer action so regardless of what your fiance wants, she's not going to find a smaller keyboard with the same feel as the DS88.

However there are plenty of 61 key synths out there with fully weighted keys, just not hammer action.

What kind of budget are we looking at here?

There are no current boards with fully weighted (which equals hammer action) keys smaller than 73. You can get "semi weighted" which means it has weights in the keys (rather than a hammer mechanism).

In fully weighted (hammer) actions, a Korg Kronos 73 and Kurzweil Forte 7 are probably the most capable sub-88 choices. Dexibell S7 Pro, Nord Stage 3 HP76, and Yamaha CP73 are all somewhat more limited, but all these boards also have enough MIDI functionality that you could also easily supplement their sounds with those from, say, an iPhone or iPad, for example. The Korg, Kurzweil, and Dexibell also let you load custom sample sets (as does the Nord, but only at single velocity levels, which may be limiting for things like horns as mentioned).

If you open up to non fully weighted keys that are still better feeling than what's in the Juno DS61, some other possibilities open up. I like the Yamaha MODX7 and Korg PA1000, for example, which are both lightweight and moderately priced, if either of those things may be important.
A

Another thought... has your finace tried the optional horn sounds that can be loaded into the DS61 and DS88 (EXP-07 and EXP-10 from http://axial.roland.com/category/juno-ds61_juno-ds76_juno-ds88_xps-30/ )? If they provide good ebough horns, and a semi-weighted "better action with larger keys" could be sufficient, you could look at the Roland FA-07. It has the ability to load both of those expansions at once (the DS can only load one expansion or the other at any given time), and it has a full VA synth for better synth capabilities.
T

Thank you both! We'll be checking those out.
T

And thanks for clarifying the difference between key mechanisms!
Ad

I played an FA07 quite a few times at my local store whilst considering buying one.

Yep, it is subjective but I did like the action, the interface and the ability of the sequencer.

What I did not like was it being an old design, Roland have updated and released a lot of keyboards in the past year and I really expected an updated version at NAMM.

tjgibsontaylor said:
She does have the new AX-EDGE keytar but you can't use that when you have to use 2 boards for songs like Come Sail Away et al. Thanks!
Click to expand... 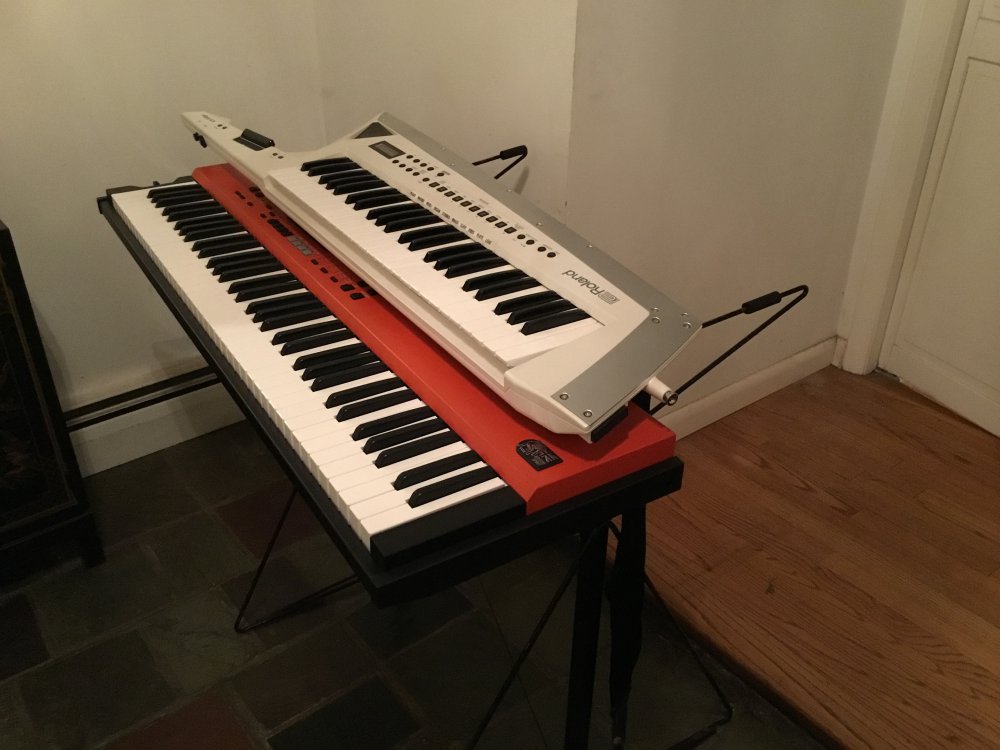