I have a couple of questions which are a bit urgent, since I am considering buying an SL88 for live gigs, and I’ve got a gig coming up soon. I believe my question will apply to the Studio as well as the Grand model (and SL73).

According to the manual it seems that I should be able to change Program with a pedal, and since the Programs apparently inherit a MIDI channel of their own, that would supposedly be the solution. The example from above: A change from P003 to P004 with a single click with the (up-)pedal. I’m planning on using only one Zone.

Can anyone confirm this?

Another concern: Is it possible to be able to see the active MIDI transmit channel on the screen at all times. Some devices turn off a selected parameter after some seconds. But if the SL can have the active Program visible on the screen (and showing the channel), then that would be great.

Can anyone confirm this?

Just guessing here, but in answer to your first question, a program or bank change on a MIDI controller generally has ZERO effect on what channel the signal is being transmitted on. For all intents ans purposes the MIDI channel remains fixed when Bank and Program LSB and MSB are sent.

As to your second question about displays? No idea but you should contact Studiologic directly and ask their pre sales support staff your questions.

I'm trying to understand why you need to change midi channels. You might not need to, but you just think that you do. Explain your setup to us and the reason for the perceived need for multiple MIDI channels. It may be that you are absolutely correct in your assessment; it might also be possible to obtain what you are trying to accomplish without the need for switching channels.

On my Kurzweil PC3 it is possible at the setup level. Within the setup there are 'zones'. Within each zone in the setup I can tell the unit which midi channel to transmit on and which LSB and MSB to connect with on the target instrument. Here is an example of why I would need to have multiple midi channels to send on:

Zone 2 (within the same setup) could be transmitting on a different MIDI channel at the same time. The only way to know for sure if this is feasible in the Studiologic world is to RTM (Read The Manual). I think it is possible. See page 11 of the manual; here is the manual Link

See below, page 11 of the manual 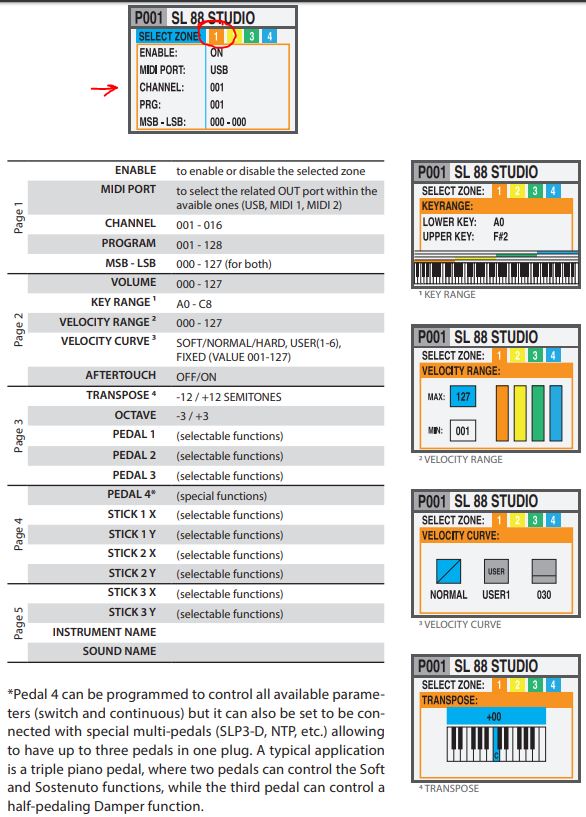 Investigate and report back your findings.
Last edited: Apr 16, 2020