Middle 8 (In the Blue of Evening)

Again, not "My Music" but people here are always kind enough to answer my questions. So ...

The second chorus ends with C7b9 - F and then then follows Ebm - Ab7 before the middle 8 starts off with Db - Ebm7b5. The lyrics of the middle 8 are:
In the shadows of the night we'll stand,
I'll touch your hand and then
etc.

But my question is this: when a song goes off into Db are these signal chords always Ebm - Ab7? Or do the 'signal' chords vary according to the key of the previous chorus? I mean, supposing the first two choruses were in C and then you wanted to go into Db for the middle 8, would you still use Ebm - Ab7. (On the other hand, perhaps one would never go from the key of C into Db ... sorry but although I'm interested in these technicalities, I really don't know about them!)

It's a really-common modulation technique, to use the dominant chord of the incoming key to announce the transition....

I've never heard the term "signal" chord but this is a descriptive and correct observation, giving a cue to a singer and to the listener.... you may also have noticed that song introductions frequently end on the dominant (Ab7 in key of Db).

The superscription of the 7 following "Ab" indicates what we call "dominant seventh". In this case, it's not because it is the 7th chord of the dominant of key of Db, but because the dominant-seventh chord resolves downward to the following chord. Two of its notes are "passing tones", namely, the 5th degree and 7th degree are half-step higher than the incoming chord notes replacing them, and two of its notes are the same as the incoming chord notes replacing them.

The "dominant seventh" name is used to differentiate this from a major-seventh chord which is formed by a root triad plus the note of the 7th major scale degree (in the case of AbMaj7 = Ab, C, Eb, G and Ab7 = Ab C, Eb, Gb)

And, modulation to the next higher key (like C to Db) is also quite common.

I'll bet, now, you're sorry you asked or, perhaps, only sorry you ran into an idiot who answered
Last edited: Mar 3, 2019

I hadn't heard this song before today, that I can recall. A piece of sheet music I saw did not indicate a change of keys, but the melody and tonic center follows Db major for 4 bars at the lyrics just as you say. For 4 bars, not sure I would show a key change either, if I were the copyist or transcriptionist. Lots of accidentals, but in certain ways, for a sight-reader, this is probably better than two quick key signature changes.

I also took a listen to the Tommy Dorsey orchestra and Frank Sinatra on it. Terrific tune, and of course, the writing, playing, and singing are impeccable.....
M

Thanks very much for taking the trouble to reply in such detail to my query. Yes, the term 'signal chord' is something I made up but I'll read your explanation more thoroughly later. It's only in the fairly recent past that I've noticed when a song goes off somewhere else ... even when there's no change of key indicated formally. This middle 8 was one example and I'm gratified to know that I got it right. So in essence "we use the dominant chord of the incoming key to announce the transition". I'll play around with this and see how things go.

I need some kind of firm rule to start with. The trouble is when people say things like "there's no such thing as a wrong note"! I can't remember now the famous jazz pianist who said this ... a way-out guy ... bit eccentric. It's just come to me - Thelonius Monk! This is all very well when you know what you're doing but I like simple rules. Having said all of that, I love playing the great standards (as best I can) on my Yamaha piano but also messing around with little phrases and transposing bits and pieces. Endless possibilities and endless fun.

Mikeo1938 said:
I need some kind of firm rule to start with.
Click to expand...

@happyrat1 posted this couple days ago. The teacher here presents some abstruse composition (see post #38 on this thread)......but the voice-leading modulation is well depicted and easy to identify in his presentation:

How the pros use modulations

have fun - your "signal chords", when dissected, are shown to have "signal notes". I really like this term.... I never heard it used before but it is useful for conveying an idea which is exactly correct.
M

Many thanks for the replies.

I've got quite interested in songs which, in the middle 8, go off into another key. It's only recently that I've noticed what's going on. In many (most?) cases there's no change of key signature but simply accidentals.

Just this morning, I found a new one: If I had you (1929, Shapiro, Campbell and Connelly). This starts in C but goes into G for the middle 8. After the second chorus you get Dm6 Adim and then off we go with sharpened Fs until, at the end of the middle 8, we have Dm7 and G7 and then back into C. (Or is the middle 8 perhaps in Em?)

On the other hand, with Smoke gets in your eyes, the middle 8 has a change of key signature. I do find that lovely song rather too hard at the moment!

I found a sheet music version of If I Had You in Bb. This one modulated to key of D minor and didn't use a key signature change, only accidentals. In this case, only couple of accidentals were required, it was in a leadsheet format showing only melody and chord accompaniment. This would tell me that the version you're looking at modulates to E minor (which is indeed the relative minor of G ).
M

OK and thank you.
I must say that I do find this business of major/minor a bit confusing. As with the above song, I ask myself, "Is the middle 8 in G or in Em?" People say, "Oh it's the way it sounds." Or they say, "Minor sound darker or sadder." The key signature is the same for both. OK it doesn't matter when you play it providing you can read the notes. But is there really no definite way to tell whether a song (or part of a song) is in G or in Em?

It can be confusing, for sure, and you're correct, it doesn't matter if you are reciting the piece by the notes.

"Oh, it's the way it sounds".... and "minor sounds darker or sadder".... are both correct statements, but don't define it well. The better, closer definitive answer comes from the scale followed by the melody, and the dominant chord.

For a quick look: 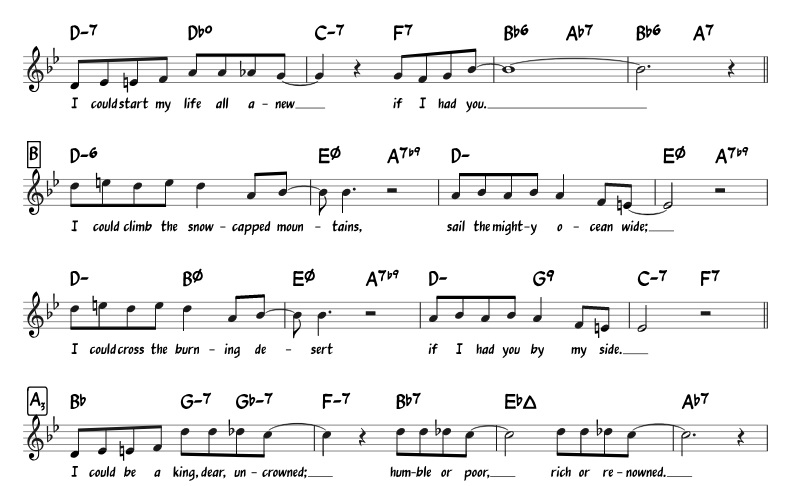 The melody is following the scale of D minor, and is being harmonized with the dominant A7 chord. If the key were F major, the E natural would still follow the scale, but the dominant resolution to A7 would then be to C7.

The difference in a major key and its relative minor can be found in the harmonization..... indeed, by your "signal chord" which is announcing the modulation 1/2 measure before B stanza.
Last edited: Mar 21, 2019

Reading the piece can sometimes be easier if there's no key signature change. Only one accidental was needed - and another significant choice factor is that the modulation was for a whole phrase.

In the case of "Smoke Gets In Your Eyes" - this would have been "accidental city" - and the modulated portion was only 6 bars, not a complete phrase. It also changed from a "flat key" (Eb) to a "sharp key" (B). Reading is easier with the key signature change. The transcriptionist also waited, in gentlemanly fashion, until the end of the phrase to change the key signature again.
M

The melody can be either major or minor. In this one measure, (key of D major) the G minor chord (iv) is used with a resolve to A9. The A9 dominant chord does not indicate a change of mode, it is major. But the G minor subdominant substitution chord gives this measure a "minor" sound. You'll get differing judgments on this one, but my take is that it's a "blue" coloration without a modal change. Others will disagree.

As an arranger I would be tempted to substitute the dominant with A(-9) because of the common passing tone (Bb) from G minor. I think that would add to the "blue" of this statement "major to minor".
M

Not been looked at this thread for a while but I'd like to thank you again for your patience and explanations.
I'd often noticed that middle 8s sounded different. It's only recently that I've started to explore what's actually going on.
Thanks again.
M
Ad

This is good for me, too. I haven't "looked" seriously at any of this in a theoretical way since I was a teenager (50 years ). Best wishes, and enjoy your music.
You must log in or register to reply here.