I've just bought a Yamaha P-125, and am loving it. However, trying to get it connected to my laptop is proving difficult. I've tried installing the recommended USB MIDI driver, but trying to use Musicsoft still doesn't work. Installing the Steinberg drivers gets it to recognize it as speakers, but still doesn't allow file access. It's plugged normally from the midi out port, into a 2.0 port (3.0 doesn't work either)
The error pictured is trying to install with it plugged in, recognized as an audio device.
Any ideas?

What version of Windows are you using?

I have not connected my old Windows 8 laptop to my P121 in the 3 months that I have had the DP.

So I have connected them up and my Laptop showed it as a Digital Piano in the Sound section of Device Manager.

But, it did show a problem as I had not installed the Driver.

I downloaded the Steinway Driver and installed it and all shows up OK in Device manager.

Now since you are having the error message here is what I do in such cases:-

Find the downloaded Steinway Driver, select it by a single left click then Right Click on it

Select Extract and point it to the YamahaP125 folder so it extracts the Zip file content there.

Power up the connected P125 and go into Device Manager to find the P125, click on it and in the pop up Window select Driver.

Then Select the manual update or manual browse option.

The Laptop should then install the driver.

Let us know how you get on.

PS
Do you have an iPad, or iPhone, if so there is Yamaha’s Smart Pianist App that you can also use. Connect them together using an Apple Camera Adapter.

Also you may like to check if the free Flowkey subscription is still available. It is a useful App for not just for learning but also for finding new songs from the Flowkey Library
Last edited: May 20, 2020
T

I think Biggles may have hit the nail right on the head, without even knowing it. First, the P125 transfers both audio and MIDI data over the USB link. The driver supports that, so it is not strange that the P125 might show up to the computer as an audio device. The correct current version is 2.0.3. It is available from either Yamaha or Steinberg, but the one from the Yamaha download site does not work. You need to download it directly from Steinberg. Biggles downloaded his from there, and his is working. If you downloaded yours from the Yamaha site, that is most likely your problem. If you did, you will need to uninstall that driver before you install the correct one, else the bad one will interfere with the good one. You should download it from:

then follow Biggles' instructions above. A USB-2 port is best but definitely do not use a USB-3 cable. The caveats in the manual state that explisitly. A USB-3 cable is not compatible with the port in the P125.
Last edited: May 21, 2020

Why do I keep calling the Steinberg Driver Steinway? Must be an old grey matter problem.

Anyway, I downloaded the Driver from the UK Yamaha site 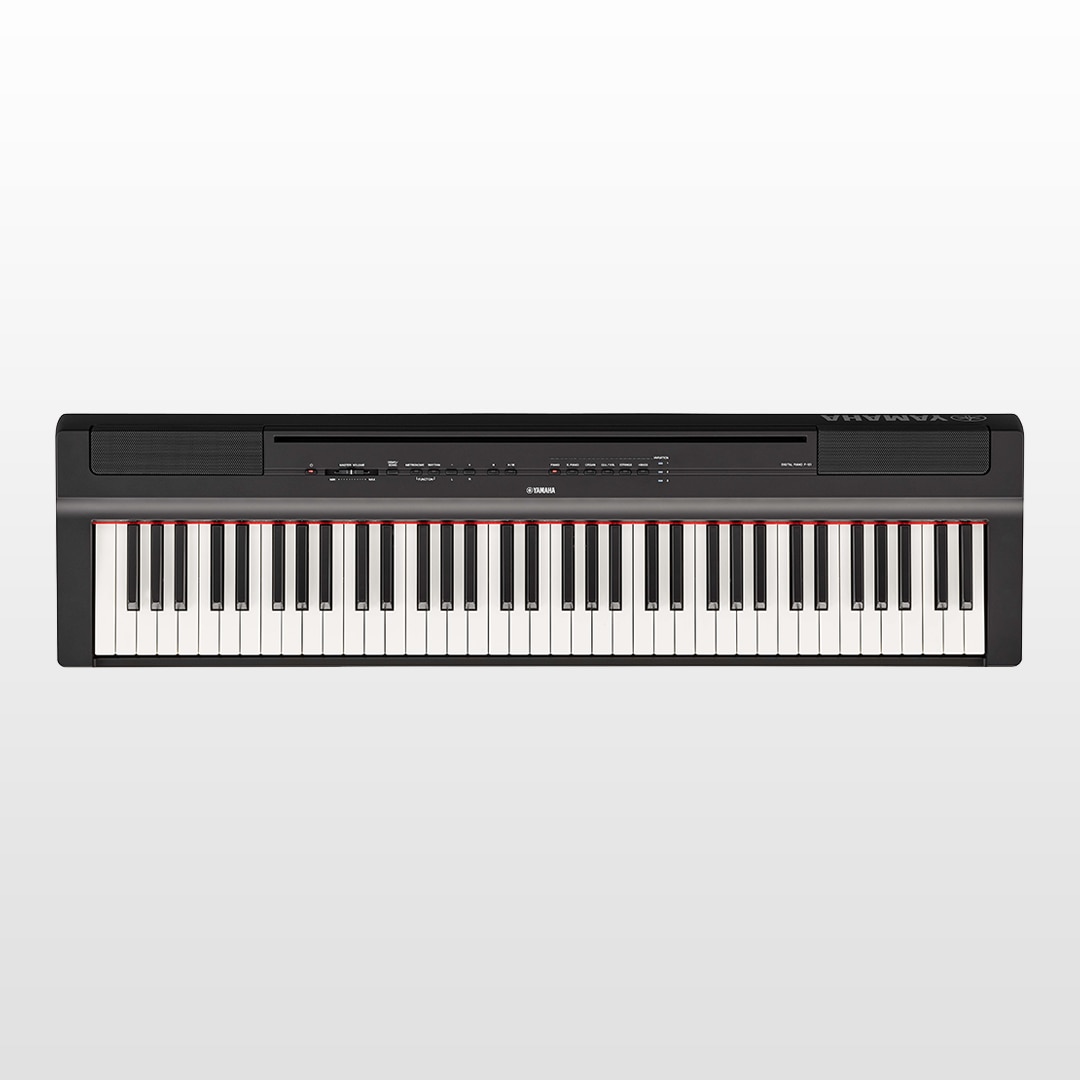 I'm a piano beginner , trying to setup my yamaha p125 with my pc. I'm facing the same 25001 error code issue. Tried both yamaha and steinway drivers. Appreciate the help if you managed to fix that issue. I'm using host to USB.
Ad

(5) Do not connect to a USB hub. Connect directly to a USB port on the computer.

(6) If you have trouble installing the Steinberg USB driver, uninstall it before trying to reinstall it.

(8) After the Steinberg USB driver has been successfully installed, you can connect the keyboard to the computer and turn it on.

Thanks for the reply, I was able to install Yamaha Steinberg driver successfully. How i proceed further to record my digital piano in PC.

Use a DAW to record MIDI and audio

Some people find Audacity to be easier to use than a full-fledged DAW, but I always thought that to be odd since Audacity's interface looks pretty much like a full-fledged DAW's does. To me, it seems like a full-fledged DAW is the obvious way to go, although I suppose the fact that Audacity won't let you record MIDI could be a help in terms of not allowing you to confuse yourself by recording MIDI when you actually wanted to record audio.

NCH Software has a few programs for recording and editing audio that you may also wish to check out-- if you're wanting to avoid a full-fledged DAW for the time being, that is. NCH usually offers basic versions of their programs for free, then encourages you to purchase the more feature-rich versions to gain access to all of their features. I'm rather fond of WavePad, which I found a few years back while looking for software to edit some audio recordings I'd made, before I ever heard of Audacity. I even bought the "master" version of WavePad because I really liked its FFT or Fast Fourier Transform features so much; I prefer WavePad's FFT displays over some of the other ones I've seen in free FFT plugins for DAWs.

If you want to just bite the bullet and go straight to a full-fledged DAW solution-- which I highly recommend, so you don't run into the situation of having to face two different learning curves, first for learning to use a basic audio recording program, and later for learning to use a full-fledged DAW-- then there are a lot of DAWs to choose from. The topic of which DAW to choose tends to come up over and over again, both here and in other forums, so you might want to search different forums (including this one, of course) for topics related to choosing a DAW.

My own feeling is that it's a lot like choosing which car to get, meaning it's difficult to know which car is going to get your "juices" pumping and make you fall in love with it, so it can be somewhat pointless to ask other people which DAW they think you should get because they might be turned on by the things that turn you off, and vice versa. It's best to just look at them yourself, try to make a short list of the ones that strike your fancy the most, and then take each one for a test spin to see if you can figure out which one "speaks" to you the loudest and clearest, as it were.

Of course, it can be helpful to ask people what they like or dislike about a particular DAW, because they may have some experience and insight into certain strengths or weaknesses that you might not be aware of-- but a feature, or lack of same, that rubs them the right or wrong way might have zero importance to you, so don't feel like you need to base your decision on other people's opinions.

Fortunately, most commercial DAWs have free trials available, and some even have free versions available, which makes it easy to check out different DAWs without having to invest any money into them, so you can compare the ones you're most interested in before deciding to fork over any funds.

By the way, I should explain what I mean by "full-fledged" DAW. A DAW is a program that lets you use a computer as a "digital audio workstation." DAWs have a number of different functions that they can perform, with the most basic ones being (1) recording and editing audio tracks and (2) recording and editing MIDI tracks. But DAWs have other functions which are important in connection with those two core functions, yet which can also be extremely useful in their own right-- that is, they can be used even if you aren't recording and editing tracks. In particular, a DAW can be used for routing audio or MIDI data streams between two or more devices or programs; for hosting plugins and playing virtual instruments (often called "VSTs," although VST is actually just one plugin format and there are several orher formats); and for controlling audio or MIDI devices or programs by sending messages to them, such as for "automatically" switching to a different sound on your keyboard while you're playing.

So part of the reason why I think it's better to jump straight into the world of DAWs instead of spending time with audio-only programs is because full-fledged DAWs are so much more useful. But this also means it's a good idea to sit back and take your time before choosing a specific DAW, because you'll want to ask yourself what functions you're especially interested in. Even though most DAWs offer more or less the same types of functions, they can vary a good bit as to how those functions are laid out in their menu system and on their screens, which can make a big difference in how simple or complex a given function is to actually use. If you know which functions are most important to you, you can focus on trying out those specific functions to see which DAWs will most easily and most sufficiently serve your needs and wants.
Ad

Whilst a DAW is the best solution do take note of Michaels excellent advice and make use of the trial versions.

Cakewalk by BandLab is totally free and very capable.

Do be warned that some DAW’s can be very temperamental in their installation and you can end up spending hours just trying to get the DAW to see your keyboard so if this started to happen uninstall that DAW and move on to another.
Ad