I have the Yamaha PSR ew400. I'm playing just the piano with the drum patterns. Can I record that to a USB flash drive? Or will I have to actually record the output on some kind of digital recorder?

Thanks. I couldn't find this anywhere in the manual.
Ad

Personally I don't own any Yamaha's but if the manual doesn't say it's possible it's probably a fair bet that it won't.

Then again a lot of more recent Yamahas use proprietary drivers to send both audio and data over the USB cable simultaneously so you may be able to record audio on your computer via that route.

If that is also not an option then you are pretty much stuck using an audio cable and plugging into your computer's sound card to record on the hard drive or else use a standalone audio recorder like a Tascam DP-008.

I record everything to my iPhone with Yamaha’s recording app Audio Rec. Very easy.
Linda

I thought I'd posted a reply to this, but I don't see it, so I'll try again.

The PSR-EW410 has the ability to record its audio output directly to a file on a USB flash drive, but the PSR-EW400 does not have that ability.

However, the PSR-EW400 (as well as the PSR-EW410) has a built-in USB audio interface, so if you connect it to a computer via a USB cable then you can record its audio output using software such as Audacity or a DAW.

You can also connect it to a computer via a TRS audio cable-- from the keyboard's PHONES jack to the computer's AUX IN jack-- although you'll either need to use a special audio cable that has a 1/4" plug on one end and 1/8" plug on the other end, or an audio cable with the same size plugs at both ends but use an adapter to convert one end to the larger or smaller plug size as needed.

Another option is to get a USB audio interface, which will usually have a better sound card than is in your computer. This is a good option if you have other audio equipment you want to record with, such as an electric guitar, bass, or microphones for recording vocals or acoustic instruments. Note that the PSR-EW400 and PSR-EW410 do have an AUX IN jack, and if you plug an audio device or other equipment into that AUX IN jack then you can record external audio along with the keyboard's audio via the keyboard's built-in USB audio interface. But for earlier models that do not have a built-in USB audio interface, or if you have more than one additional audio source that you want to record, an external USB audio interface can be a very good option.

Or you can use a standalone portable recorder.

LindaP said:
I record everything to my iPhone with Yamaha’s recording app Audio Rec. Very easy
Click to expand...

Hi Linda, I would like to try out this app. I can't find the link on play store. Can you post the link please.
btw. I have an android . . Wonder if it works on that.
Cheers
Ray

Unfortunately, Yamaha's apps are only for iPads, iPhones, or iPod touches that use a recent enough version of iOS. They do make a few programs for Windows or Mac computers, but their apps are strictly for iOS.

However, there should be third-party Android audio or MIDI apps that can be used with keyboards from Yamaha or other manufacturers, assuming the keyboard can be successfully connected as needed to the Android device and that special drivers are not needed for using the keyboard with the device.
Ad

Thanks Michael
I will do some research.
Cheers
Ray

With Android devices, the first and biggest hurdle is often just getting your keyboard connected to your device, since you generally can't simply plug a USB peripheral device into most tablets and other mobile devices without having to use a special adapter (such as Apple's Camera Connection Kit) or without having to install a special driver (such as a USB-On-The-Go driver).

So before you spend much time investigating what audio and MIDI apps are available for Android, you might want to research whether you can even connect your keyboard to your Android device, and if so then what if any additional adapters or software you'll need to use to make that happen.

What are the names of the programs, the Yamaha programs that you use with the iPod?

I think that any of Yamaha's apps can be used on an iPod, but it must be an iPod touch, and it must be a model that can run one of the newer versions of iOS.

Of course, a particular app's requirements may change over time as the app is updated.

But as far as I know, only the most recent versions of apps are available in Apple's App Store, so there's no way to download and install earlier versions of apps that required versions of iOS which your iOS device is able to run.

You can read about Yamaha's apps here:

And blow me down-- what do I see but some apps which are available for Android devices as well as iOS devices? Unfortunately, I don't think those particular apps are of interest to the current topic, but the fact that Yamaha is now publishing Android apps is a promising sign!

Anyway, the information for each app should tell you which devices the app is available for, including which version of iOS is required.

SeaGtGruff said:
And blow me down-- what do I see but some apps which are available for Android devices as w
Click to expand...

You just aroused me
Ray
Ad

LindaP said:
I record everything to my iPhone with Yamaha’s recording app Audio Rec. Very easy.
Linda
Click to expand...

HI Linda, what interface do you use to get the keyboard output into your iPhone?

And what app do you use for recording the audio? Thanks

If Linda meant Yamaha's Cloud Audio Recorder app, it lets you record audio from the built-in microphone of your iOS device, or you can use WiFi or a USB cable if your keyboard supports it:

Your PSR-EW400 can send and receive audio using a standard USB 2.0 cable, so you can connect it to an iOS device using Apple's Camera Connection Kit if it's an older model with a 30-pin port, or Apple's Lightning To USB Camera Adapter if it's a newer model with a Lightning port.

Yamaha doesn't make an Android version of their Cloud Audio Recorder yet, but there should be similar apps for Android devices from other developers.

All I want to do is record directly from the output of the ew400 into the iPad or iPod if possible, the simplest way. No multi-tracking or anything, simple.

It looks like I'm going to have to buy at least the camera adapter cable.

Yes, you will, because that's the only way to connect a USB cable to the iOS device. Just make sure it's USB 2.0, because a USB 3.0 cable won't work.

What version of iPad do you have? I have an older iPad 2 with the 30-pin connector, as well as a new iPad 5 with the Lightning connector, so hopefully I can help you if you run into any issues.
Ad

I have an iPad Pro 10.5 with a lightning connector. But I also have some iPods. And that's what I use for the music. I'm new to Apple and I thought there has to be a way to just record on it. I guess there is but you have to run around circles and jump off a bridge before you can do it. Typical Appleway

Download Garage Band if it is not on your iPad.

Turn off, iPad and your 400, plug in Camera adaptor into iPad, plug USB cable into 400 and into Camera Adaptor, turn on 400, once its booted turn on iPad, start Garage Band.

It should see the 400 and offer choices.

Select your choice and press Record on the App, after count-in perform your song, press Stop and press Play to listen to your recording.

In the time it took to read the above that is exactly what I have jus done with my own iPad and Korg Kross, my recorded 4 bar improv is even not to bad.

Its that easy, or it should be.

Biggles, thank you for mentioning GarageBand! I don't know why I didn't think to mention it.

And I might add that a short USB cable is perfect for connecting to the USB port while the iPad is propped up on the music rest-- a longer cable will just hang down and be a potential bother.
Ad 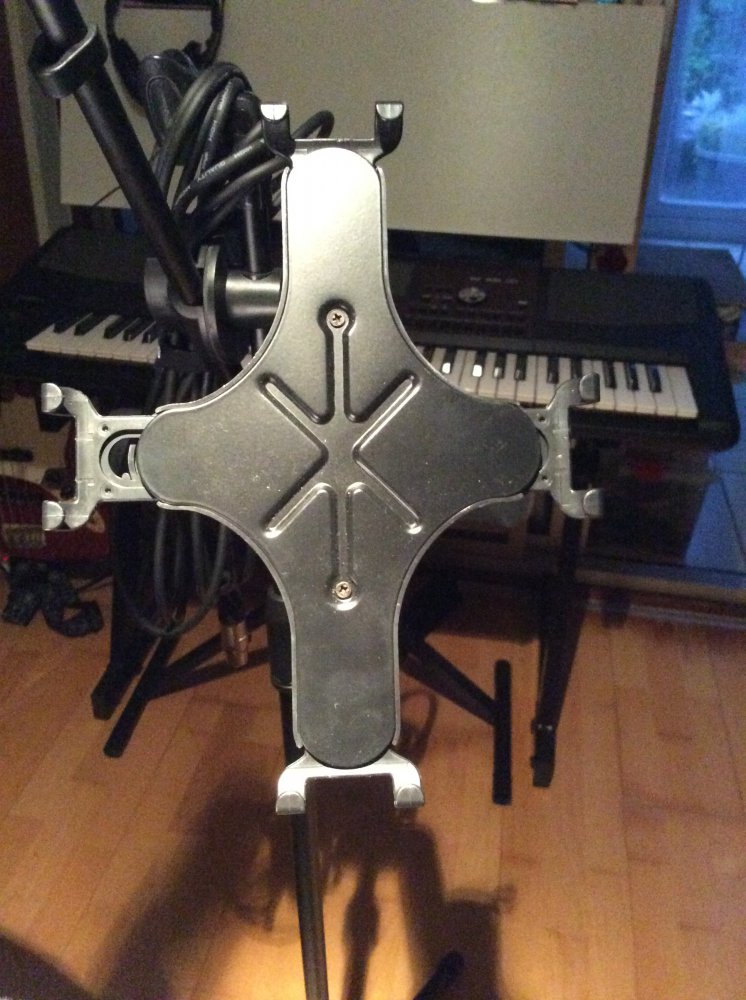 .
I found one of these for sale at a Guitar show, it takes my iPad and it is fastened to my mike stand.

Certainly far safer than putting the iPad on the music rest (which I do not have on the Kross).

Btw.
There are a mass of sheet music apps available as well and I still have Yamaha’s Notestar App.
Ad