Hi,
I have a Roland FP-5 controller and the sustain pedal doesn't function properly in LPX 10.2 (or 10.1) if using either a logic or GB legacy acoustic piano. If I press the sustain pedal, when I release it, the notes continue to sound.
This does not happen with an electric piano, nor with an EW acoustic piano plugin (QL pianos platinum).
It doesn't happen when using a Korg controller either.
Nor does it happen in Pro Tools.
Changing the switch on the sustain pedal from "switch" to continuous doesn't change anything.
The pedal gives readings other than CC 64 127 and CC 64 0 but as mentioned above, this doesn't prevent it working under all other conditions except in LPX and only then with one of the legacy acoustic pianos.

Any suggestions would be much appreciated.
cyrukoch
Ad

I think Dave hit this one right on the head.

I believe Korg and Roland pedals are opposites in polarity, ergo, a Korg pedal will not work with a Roland and vice versa.

Thanks Guys,
I don't think that is the problem. I am using a Roland DP10 (and I have tried two of them). There is no polarity switch but rather a switch that says "switch" or "continuous." Actually the pedal acts as if it is always on continuous no matter which position I pick. In other words, I get a series of increasing CC 64 values until the value reaches CC 64 127 at which point sustain is on. Then when I release the pedal I get another series of decreasing CC 64's ending up with a CC 64 of about 14 (CC 64 14). In other words the CC 64 never gets down to CC 64 0.
So issue one is "Why doesn't the switch in the "switch" position just give me two values?" (CC 64 127 and CC 64 0) and issue two is "Why doesn't the CC 64 value return to 0 (CC 64 0)?"
In addition, as I mentioned, even with both pedals acting in this fashion, I don't have the problem with electric pianos or with 3rd party virtual acoustic pianos (EWQL Pianos Platinum) nor do I have the problem with Pro Tools. In other words, even with the wonky behavior of the pedal sustain goes on and off as it should when it should.

PS I am glad to learn about the polarity difference between different pedals and that some have a polarity switch. I have a small M-Audio O2 controller and the DP10 pedals cause sustain to be the opposite of what it should be which would be explained by what you gents are talking about.

I also tried my brothers Korg pedal and that did not fix the problem but I think the polarity was opposite of the Roland pedals.

Here is one with a polarity reversal switch so it will function as open or closed. 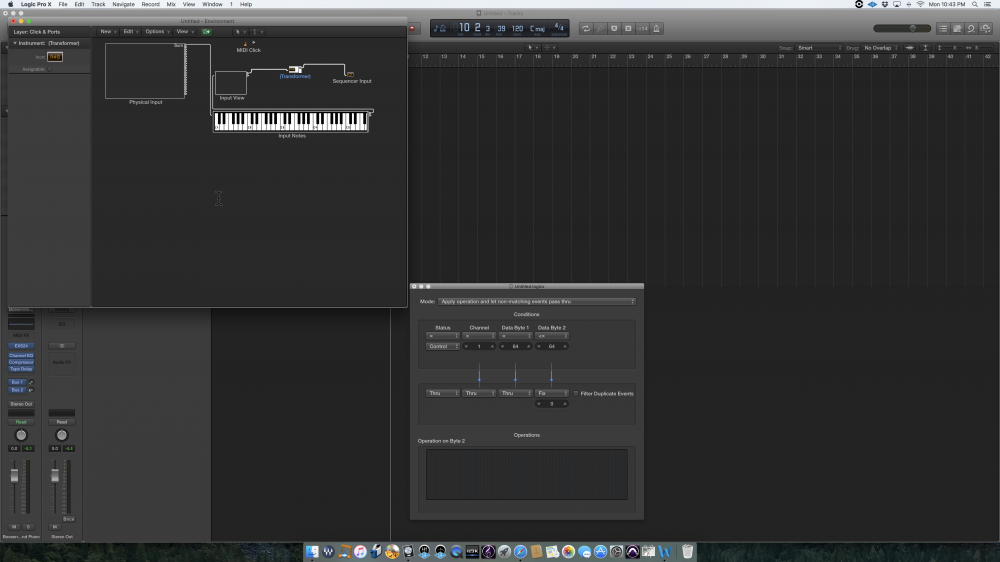 Thanks again, Delaware Dave,
The first thing I did today was to go and buy an on/off pedal (mono plug) with a polarity switch and it did nothing. In fact in the manual for the FP-5 it actually states that the switch on the DP10 should be set to continuous. I then discovered that with the switch set to continuous the damper pedal works to sustain the notes until you let the pedal up at which point the notes stop as they should.
But the problem remained in Logic (only with the acoustic pianos as mentioned above).

I finally found an old post in the logic users group which described the same problem and the solution.

Thanks for the good suggestions.