Well, my Hydrasynth finally showed up yesterday and here's what my studio is going to look like for the next year or so.

It's going to take a few weeks to get the hydrasynth to play nice with Cakewalk since there's no INS file out for it and I'll probably have to roll my own.

It's a Festivus miracle I tells ya folks

Drummer in one of my bands just bought that Alesis sample pad Gary.

CowboyNQ said:
Drummer in one of my bands just bought that Alesis sample pad Gary.
Click to expand...

Tres kewl Paul. I gotta say that keeping a steady beat takes a lot more effort than you'd think if you were finger drumming on a table top.

Anyway, the new hydrasynth is a beast. It's bloody heavy with all steel construction and it must be packed with bricks to judge by lifting it. But it's also packed with wavetable goodness just screaming to get out.

I have my work cut out for me over the next month or so.

I have an argon8m on pre order myself.

I've only just plugged it in and powered it up so far.

Tomorrow I've set aside a few hours to roll up my sleeves and dig deeper.

I'll probably have to do a firmware update and download the latest user bank as well.

Will report in by the weekend.

I have an argon8m on pre order myself.
Click to expand...

I had a few hours free to mess around with the hydrasynth today. First of all the sounds are quite similar to the Blofeld I sold to buy this. Not that surprising really considering they are both wavetable synths.

Secondly I spent most of my time trying to get it to talk to Cakewalk. I had to email ASM for a listing of presets so I could create a Cakewalk INS file for it. That will take some time before they reply and I get it together. At the moment the Synth and Cakewalk are not really talking to each other.

Also, I believe I need to do a firmware update, but reports of major bugs in the latest firmware on Gearslutz have me worried. However there are reportedly MIDI implementation fixes in the most recent version which I may need to get it talking to my DAW software.

I may wait another week though in case an updated firmware suddenly becomes available.

I'll keep you posted as things develop and hopefully get some music up on youtube by the end of the month.

I found the PDF files I needed to create a Cakewalk INS file and I've ripped one out this morning. I think I got it right on the first try

I'm attaching a copy here in case anyone else happens to need one. 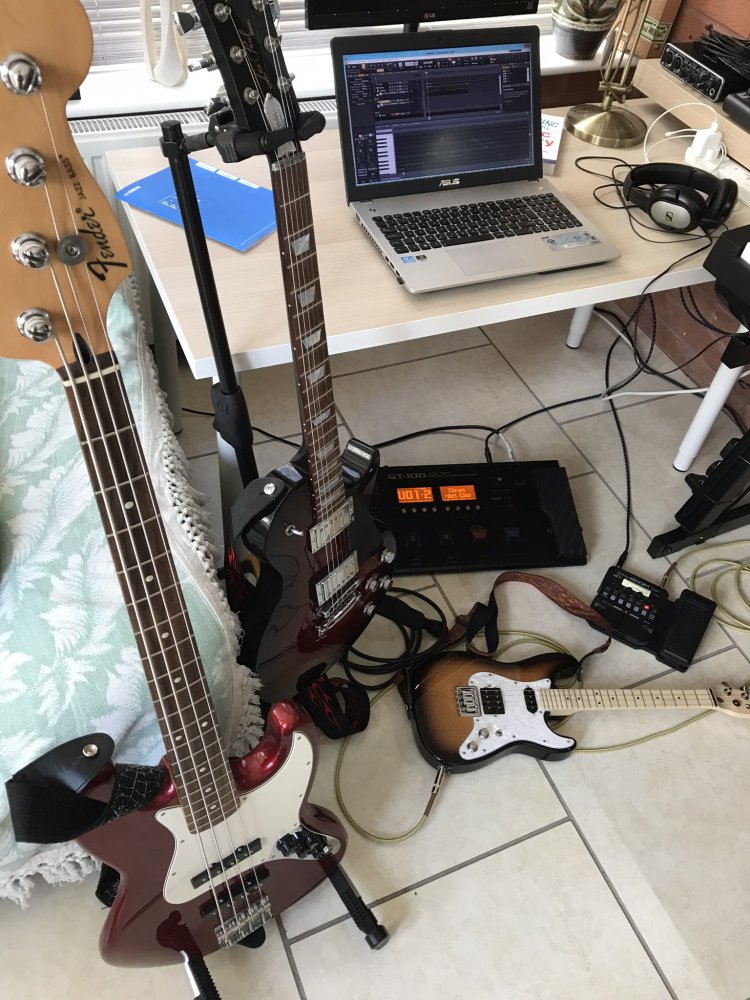 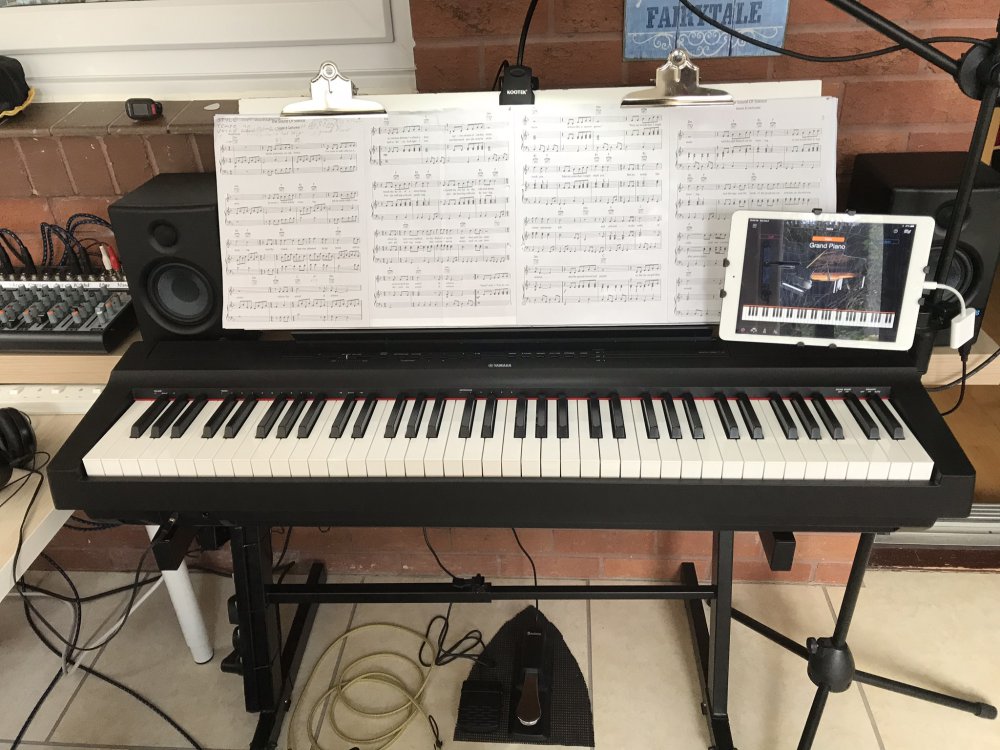 Tonight was my first gig using a dual Yamaha MOXF rig. The 88 weighted key is on bottom, and 61 non-weighted up top. In the last picture you can see my little Radial Key Largo mixer. I go straight out of the Key Largo directly to front of house and the FOH sends mmy keys to 2 monitors on stage. I think this is some of the cleanest keyboard audio I've personally experienced. Don aka B3

Don I have a question for you. I’ve also just acquired a Key Largo and it will be making its gigging debut on Friday night.

It has an aux send for monitoring. Is there any reason you wouldn’t use that instead of relying on FOH guy for your personal monitor send?
Last edited: Feb 17, 2020
Ad

CowboyNQ said:
Don I have a question for you. I’ve also just acquired a Key Largo and it will be making its gigging debut on Friday night.

It has an aux send for monitoring. Is there any reason you wouldn’t use that instead of relying on FOH guy for your personal monitor send?
Click to expand...

I have a nice pair of Yamaha DXR10's and I use the Key Largo "Monitor" send , as well as the Main sends for FOH. Last night it was pouring rain at set-up time and the sound company already had monitors in place and I didn't have to haul mine in the rain. One note, be sure you have the proper cabling for the Key Largo. I seem to remember that the Monitor outputs are balanced and use TRS jacks. Pls double check my memory,....lol. I think you will like the quality of the Key Largo. Don

You are correct the Key Largo requires 6.5mm TRS jacks in the monitor send.

I’ve trialled it at rehearsal and am very pleased with it. I agree with you it’s clean as a whistle. My rack unit with line mixer and DI can stay home when I do pub gigs now!

New Synth day (well, new to me). May or may not be a keeper - I considered about 4 options - all were compromises on what I wanted in some way, but this came up used at a decent price, so jumped on it. 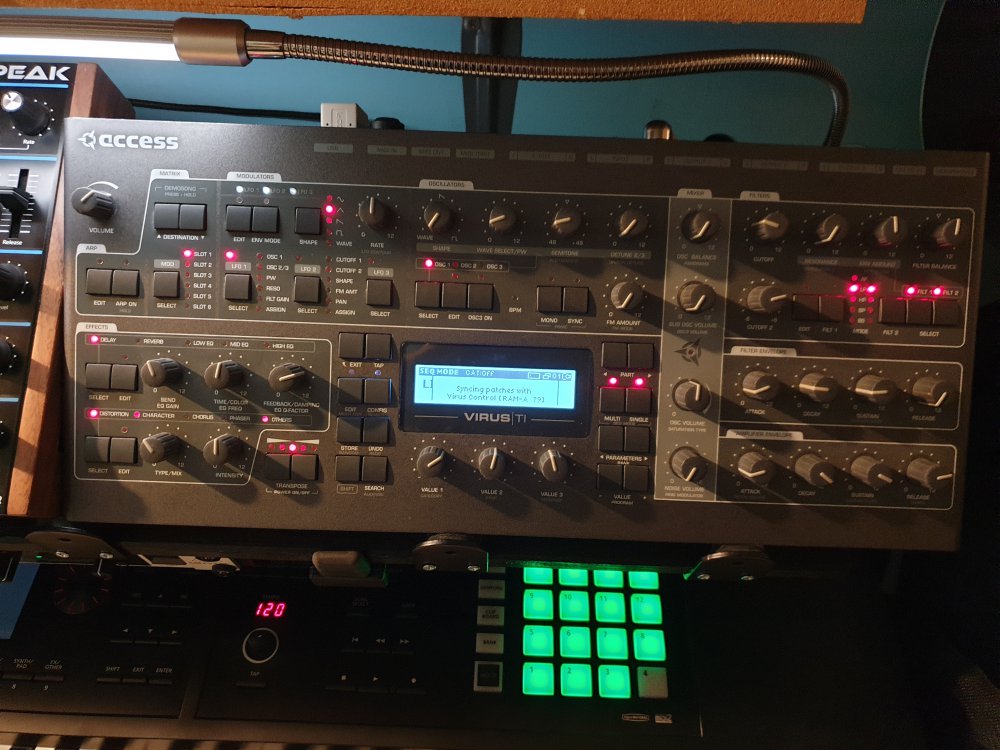 Keys rig as it stands (Live use mostly - Im a live player). 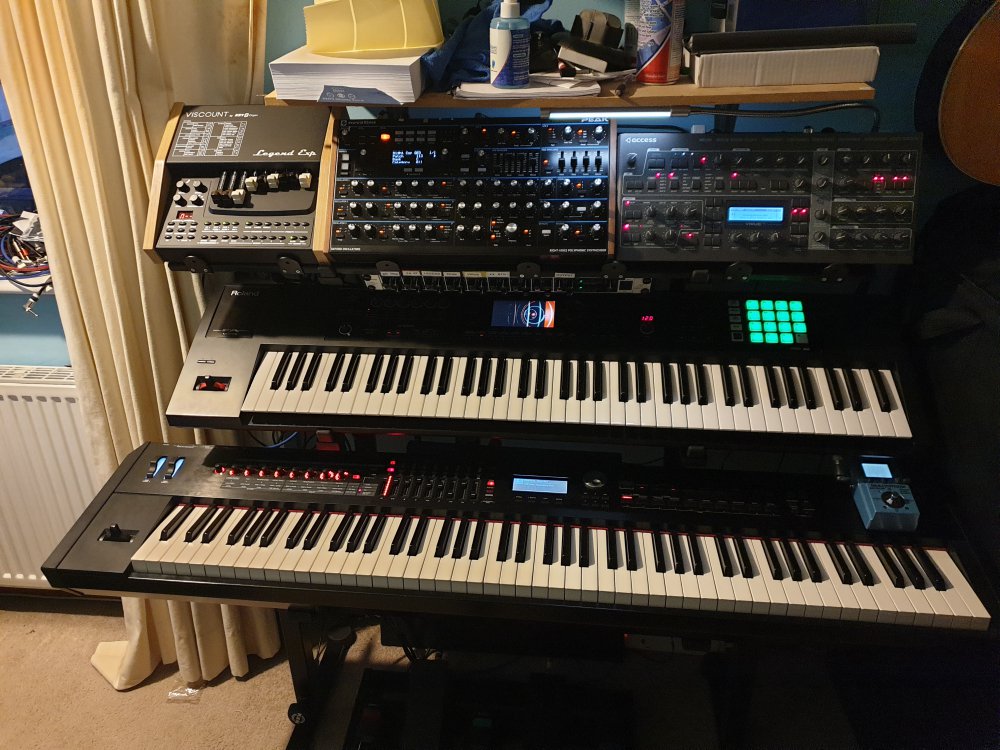 Very nice! I hear the Access Virus is amazing!
P

Initially, I was a little underwhelmed actually, BUT Im used to the sound of my Peak. The Virus sounded a little lightweight in comparison? But I was going through some presets (and the previous users own patches) just to get an idea.

When I started playing (there are some nice hidden features I had to work out how to get to - like a moog filter, and rising/falling sustain levels in the envelopes) and I created a patch very close to a Peak one I had quite quickly - I then let it evolve as I played and it turned out really nice and different. When I looked at the time, Id lost 6 hours......

I havent found a Mod envelope yet - Im assuming it doesnt have one as such as theres no front panel controls for it - but there will be a way - wither a one shot LFO or a shift function somewhere, or even an ENV just int he menus rather than front panel control.

Theres a lot of sound mangling potential int he box for sure.
Ad 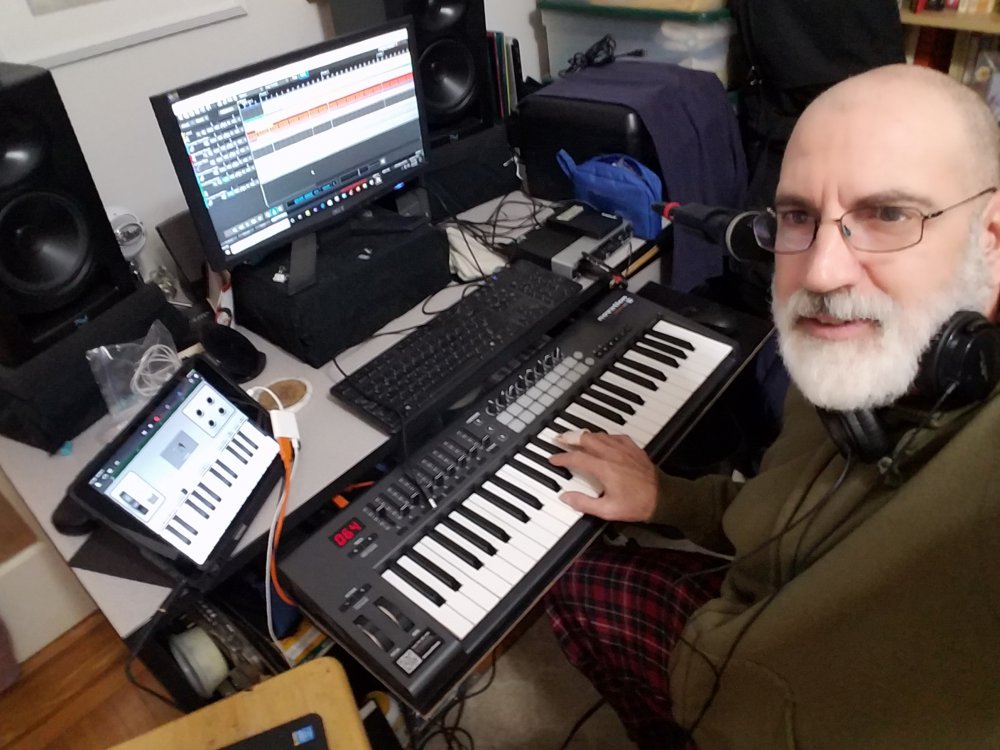 I really have to do another studio tour video. Not that it's changed much but it's cleaner! I haven't bought much new gear either. At least that's what I tell my wife!
You must log in or register to reply here.